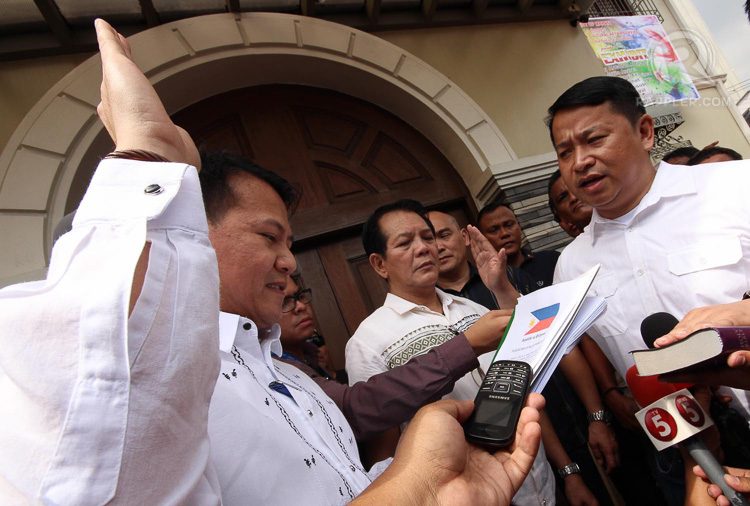 Facebook Twitter Copy URL
Copied
Vice Mayor Romulo Peña, a former ally of the Binays now with the Liberal Party, is sworn in as acting mayor while Junjun Binay refuses the idea of 'giving away' his post

MANILA, Philippines – After days of tension at the city hall, Vice Mayor Romulo Peña took over as acting Makati mayor on Monday, March 16, saying he will “cleanse” city hall.

Peña was sworn in just before 10 am Monday at the Poblacion Barangay Hall, while hundreds of supporters of suspended Mayor Jejomar Erwin Binay Jr and policemen surrounded city hall.

After he was sworn in, Peña appealed to Binay’s supporters to not create trouble and go home.

He gave assurances that the benefits that citizens enjoy under the Binay administration would continue despite the change in leadership. “Baka madagdagan pa (or more benefits could be introduced).”

This came nearly a week after the Ombudsman on March 11, ordered the 6-month preventive suspension of Binay over allegations of irregularities in a contract related to the construction of a Makati city hall annex.

Early Monday, the Department of the Interior and Local Government (DILG) posted the suspension order outside city hall. NCR Regional Director Renato Brion arrived at the city hall past 8 am.

The Makati mayor, son of Vice President Jejomar Binay, earlier filed a petition with the Court of Appeals, asking for a temporary restraining order on the suspension order.

He also refused to leave the city hall prior to the resolution of his petition, saying that it would be like “giving away” his elective post to Peña – the Binays’ former ally under the United Nationalist Alliance (UNA) party, now a member of rival Liberal Party.

The mayor’s camp has criticized the Ombudsman’s decision as part of the ruling party’s design to derail the elder Binay’s 2016 presidential bid.

The Makati mayor noted that it was the DILG, headed by Secretary Manuel Roxas II, who was tasked to enforce the order. Roxas is perceived to be the elder Binay’s rival for the 2016 polls.

The Binay camp also said that the suspension order was meant to remove the Binays from their elective positions and install their political rivals in power.

Binay had warned that a second wave of suspensions aims to target the entire city council and install a caretaker officer in charge – a move that he said disrespects the decision of Makati voters who elected him to office.

Prior to becoming vice mayor, Peña ran and won as barangay captain under UNA. He split from the party in 2010, when he became the running mate of then Vice Mayor Ernesto Mercado, who was challenging Binay for the top post.

Mercado lost, but Peña won the vice mayoral post. Mercado is one of the key figures accusing the Binays of corruption and irregularities in the city government, the subject of a months-long Senate investigation.

Peña was re-elected in 2013, when he ran under the Liberal Party. – Rappler.com