ARMM gov to Senate, BOI: What about the civilian casualties? 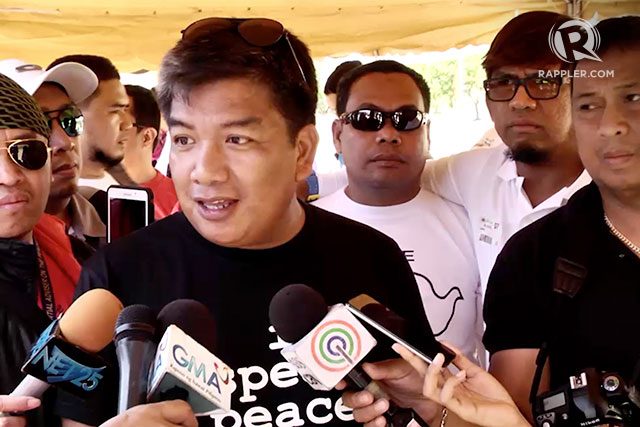 CORREGIDOR ISLAND, Philippines (UPDATED) – Who will be responsible for the civilians who were killed in Mamasapano?

This was the question that Autonomous Region in Muslim Mindanao (ARMM) Governor Mujiv Hataman posed to the Senate and the police Board of Inquiry (BOI), which recently released their reports on the deadly police operation in Mamasapano, Maguindanao, that killed 44 elite cops, 18 Moro rebels, and 5 civilians.

Hataman said the Senate and the BOI reports were “insufficient” as they failed to consider the plight of the families of civilians who were killed in the firefight.

“Anong gagawin natin sa mga inosenteng mamayan? Lagi na lang silang dehado (What will do about the innocent civilians? They are always on the losing end),” Hataman said.

Sister Maria Arnold Noel also raised the same lament over how public discourse over the Mamasapano incident has been handled.

“While we salute the SAF 44, we have forgotten thousands of Muslims, men and women who have perished in the decades-old conflict in Mindanao,” Noel said.

“There was a (8-year-old) Muslim Filipino girl who passed – nobody ever mentions her name now,” she added.

The girl’s name was Sarah Pananggulon.

Hataman on Wednesday led the commemoration of the Jabidah Massacre – said to be the catalyst of the decades-old war in Mindanao.

In 1967, Filipinos from Basilan, Sulu, Tawi-Tawi, and Zamboanga were recruited to be part of a commando unit called “Jabidah” under a secret plot hatched by Marcos to invade Sabah and reclaim it from Malaysia. The plot was called “Operation Merdeka.”

But the plan did not materialize. Aside from not receiving stipends promised them, the trainees were subjected to harsh training conditions, lacking basic amenities with only ruins left behind by the World War II as their shelter. (READ: Jabidah and Merdeka: The inside story)

The commemoration of this tragic event comes just a day after the Senate released its report in Mamasapano that tagged the incident as a “massacre.”

Hataman had some reservations against the Senate’s finding.

In the aftermath of the firefight, the military launched an all-out offensive against the BIFF, partly to hunt for Usman. The ongoing hostilities has displaced more than 100,000 Maguindanao residents.

The Senate report on the Mamasapano that culminated a series of hearings found that President Benigno Aquino III must “bear responsibility” for the operation, in part for allowing then suspended police chief Alan Purisima to be involved.

Some sectors have called on Aquino to apologize for the debacle following the release of the report. Hataman, a close ally of the President, however believes he has nothing to apologize for.

(Why would he apologize? For what? Let us remember – there are many security forces who have died there, not just SAF. Now my question is – what is so special about the SAF? Like soldiers, they swore to the Republic of the Philippine to fulfill their duties.)

(Just recently, a ranger captain died. Ten died in Jolo. Their families did not demand for compensation. You have to remember you died in battle. If those without arms died, what more those with arms? For me, the President needs to explain why this happened. But he would apologize, for what?) – Rappler.com