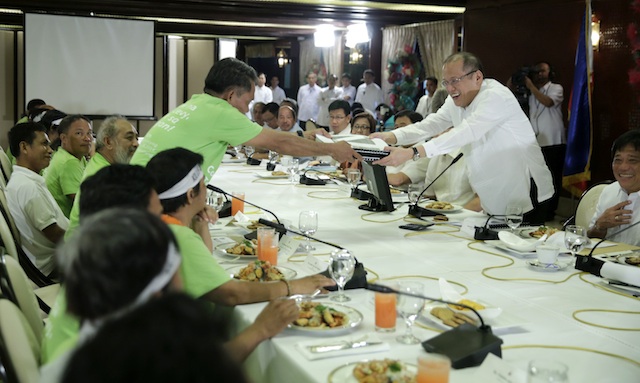 MANILA, Philippines (3rd UPDATE) – President Benigno Aguino III has signed Executive Order 180, which authorizes the utilization of the P71-billion coconut levy funds to benefit coconut farmers – a promise he made to the sector nearly 4 months ago.

“The nation’s coconut farmers are among the poorest. They have been waiting for this for too long. They have fought long and hard for these funds and now, finally, after 40 years, the funds will now be used for the benefit of our coconut farmers,” Pangilinan said in a statement on Thursday, March 19.

The order aims to improve coconut farm productivity, develop coconut-based enterprises, and increase the income of coconut farmers through the coco levy fund.

There is around P71 billion (US$1.6 billion) in the National Treasury and the United Coconut Planters Bank (UCPB) that the Supreme Court, in 2012, declared must be used to uplift the lives of Filipino coconut farmers, one of the poorest sectors in society according to the National Anti-Poverty Commission (NAPC).

The P71 billion represents the shares formerly owned by San Miguel Corporation that the Supreme Court declared as rightfully belonging to the government in 2012.

The government agency used it to compensate Cojuangco after it bought UCPB (formerly First United Bank) stocks from Cojuangco’s uncle, Pedro Cojuangco, in 1975.

The stocks were bought using funds form the coconut levy paid to the government by Filipino coconut farmers, under the impression that the government would use the funds for programs meant to improve their lives and the industry.

The 2012 Supreme Court decision, after decades of legal battles, declared that the SMC shares are “owned by the government to be used only for the benefit of all coconut farmers and for the development of the coconut industry.”

Both EOs are in compliance with the 2012 Supreme Court decision.

Aquino had tasked Pangilinan, who chairs the Philippine Coconut Authority (PCA) Board, to conduct consultations with the coconut farmers to ensure that their inputs are reflected in the EO.

“We must now ensure no nonsense implementation of programs. The coco levy funds shall be used for their benefit and for the development of the coconut industry. This is not simply a matter of a resolution of a long drawn legal battle as it is an issue of justice for our coconut farmers,” Pangilinan said.

When he met last year with KILUS Magniniyog coconut farmers who marched all the way from Davao City to Malacañang to air their grievances to him, Aquino promised to work on an Executive Order for the mobilization of the funds, while awaiting legislation on the use of the coco levy funds.

In the November 26, 2014 meeting, it was agreed that an EO will be signed after the Supreme Court ordered the entry of judgment for its final decision on the fate of the coconut levy funds made on September 4, 2012. The High Court did so on December 10, 2014. (READ: SC affirms decision to give coco levy funds to farmers)

The farmers had asked for an EO that would create a perpetual trust fund from the P71-billion coco levy funds currently in the National Treasury. – with reports from Natashya Gutierrez and Pia Ranada/Rappler.com