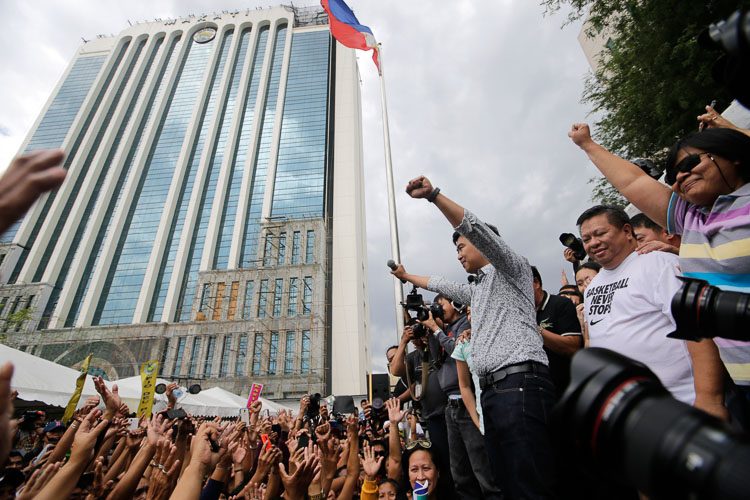 MANILA, Philippines – “Opinion and speculation” over “court order” – which one holds more weight?

Speaking to fellow lawyers in Cebu City on Friday, March 20, Vice President Jejomar Binay criticized the stance of the Ombudsman and the interior and justice departments over the temporary restraining order issued by the Court of Appeals (CA) on the suspension of his son, Makati Mayor Jejomar Erwin “Junjun” Binay.

During a speech at the Integrated Bar of the Philippines’ (IBP) 15th National Convention, Binay said the 3 offices showed a “stubborn display of political arrogance” and are “brazenly ignoring the lawful court order.” (READ: Binay camp files petition to cite Roxas in contempt and DILG on Binay contempt case: ‘Baseless’)

The younger Binay, along with other Makati city officials, was ordered suspended for 6 months by the Ombudsman Wednesday, March 11, pending an investigation into the alleged anomalous design and architectural contract, and construction of the Makati City Hall annex building.

The suspension order was served by the Department of the Interior and Local Government (DILG) on Monday, March 16, but on the same day, the CA issued a TRO stopping the suspension.

Lawyers, however, said that the TRO prevailed, since it refers to the actual suspension, not the serving of the order to the parties concerned. (READ: Lawyers on Junjun Binay TRO: DILG got it wrong)

“Since when can an opinion and speculation overrule a court order?” Binay said in his speech.

Binay thanked the lawyers and legal experts, including the current IBP president, who sided with them in asserting that the TRO had primacy over what he said were “unilateral interpretations” of the 3 agencies in question. (READ: Binay asks CA to cite Ombudsman, De Lima in contempt)

“The rule of law provides predictability in the outcome of conflicts arising from transactions in commerce and industry. That is why upholding the rule of law is actually a pre-requisite to progress,” he said.

Binay also praised the IBP for standing up against Congress and the executive branch, particularly during the impeachment of former Chief Justice Renato Corona and the controversial Disbursement Acceleration Program (DAP).

“This heroic effort of the Bar assures society that there is an institution ready to stand up to defend the constitutionally mandated separation of powers,” he added.

Under a Binay presidency

In his speech, he also let the IBP members have a “peek” at what kind of “leadership and governance” the country can have in 2016 and beyond.

The Philippines could become a “great country” that is “prosperous, peaceful and orderly, efficiently governed,” the Vice President said – hinting, not explicitly stating, that it would be realized under a Binay presidency.

Binay has openly expressed his intention to run for the presidency in the 2016 elections.

As he laid out his vision, he also encouraged the lawyers to consider a “once-in-a-lifetime” chance to be in public service.

He also said that the next administration should build upon the Aquino administration’s economic gains, but should also implement new infrastructure projects to speed up the economy.

He also vowed that the DAP, the Priority Development Assistance Fund (PDAF), or their derivatives will be abolished.

Binay also made another call not to rush the approval of the Bangsamoro Basic Law, saying it needs further scrutiny. – Rappler.com