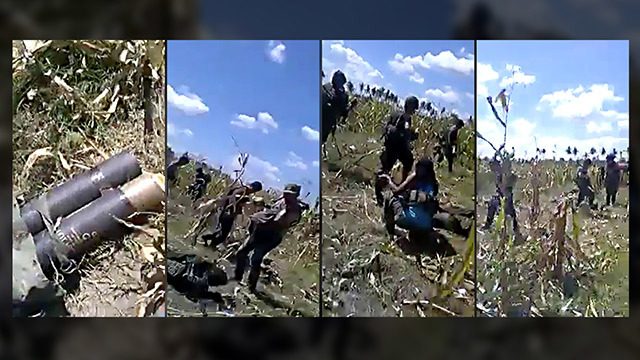 The clash led to a political fallout that has endangered the future of the peace process in Mindanao.

The gesture was, however, mired in a number of controversies, including allegations that one of the 16 firearms returned to authorities belonged to PO1 Joseph Sagonoy – the policeman shown being shot to death in the video.

“The taking of the firearms is different from the act of killing. And as stated by the BIAF members, they took the firearms of the dead 55 (Special Action Company) and those who had been immobilized, but there was at least one other group that had come into the encounter site after the BIAF left it at around 1400H,” the report said. (READ: Rebels in viral Mamasapano video likely BIFF – NBI)

How SAF troopers were retrieved Following the clash, reports spread that some of the fallen SAF members were found without their clothes on when their bodies were retrieved. (READ: Espina turns emotional over SAF 44 ‘overkill’)

Police laboratory examinations found at least 3 of the slain SAF members sustained gunshot wounds” on their torsos, which should have been covered with bulletproof vests, while another 6 SAF troopers died through a single gunshot to the head. Several others were shot at close-range while the rest died due to sniper fire.

The report included photos that showed how retrieval operations were conducted. Some of the cadavers had to be dragged from the river. One of the photos showed one civilian pulling on a rope that had been tied to the foot of the fallen SAF trooper.

Retrieval operations extended up to the day after the clash. It was reported in the aftermath of the incident that local officials in Mamasapano helped in retrieving the bodies.