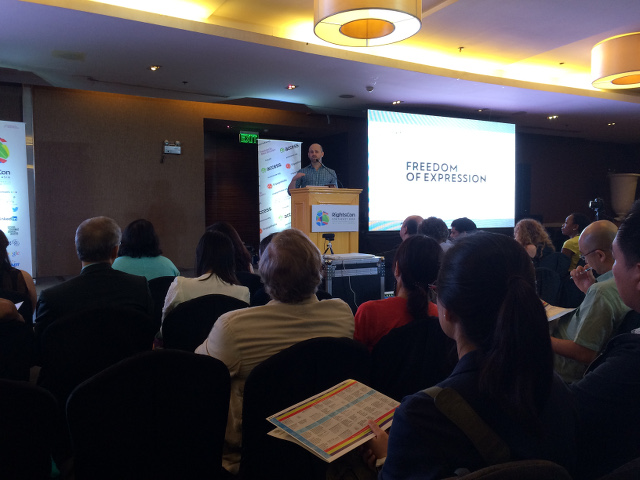 MANILA, Philippines – As a global Internet freedom conference opened in the Philippines, delegates repeatedly made an ironic side comment: the Internet connection in the country was so slow.

The Philippines’ “slow but open” Internet was a key topic on the agenda of RightsCon Southeast Asia, a summit series that tackles global Internet issues from a human rights perspective. International non-governmental organizations opened RightsCon in Manila on Tuesday, March 24, the first time the two-day conference is held in Asia.

“Southeast Asia is where the Internet population is. It’s where the call centers, the hardware developers, software engineers are and yet there’s very little discussion on digital rights. We want to have that conversation to ensure that Southeast Asian users are able to claim and enjoy their rights,” organizer Brett Solomon of the international NGO Access told Rappler.

RightsCon Southeast Asia gathers 500 delegates, including civil society members, activists, lawyers, companies and government officials at the Crowne Plaza Manila Galleria from Tuesday to Wednesday. The summit discusses a wide range of issues from LGBTs’ use of the Internet, privacy and chat apps like Line, the Internet and disaster preparedness, to promoting public participation on Facebook in Myanmar.

The NGO Foundation for Media Alternatives (FMA), the local organizer of the event, told Rappler that RightsCon aims to raise awareness about issues like privacy and freedom of expression in a country dubbed the social media capital of the world.

“Our discourse on social media and Internet governance in the Philippines is underdeveloped. We are big on social media. Social media is the Internet for Filipinos but then again, how do we engage Facebook and Twitter, companies with power over our content? How do we make them accountable? That’s something we have to talk about,” said Nica Dumlao, Internet Rights Program Coordinator of FMA.

Dumlao said that of all countries in Southeast Asia, the Philippines was chosen host of RightsCon because of its relatively open Internet policies. Still, Filipino netizens expressed concern about Internet access and connectivity.

How free is DOST’s free wifi?

A session dubbed “Is IT More Fun in the Philippines? PH’s Struggle for a Free and Open Internet” tackled the Internet landscape in the country, where speakers identified the digital divide as a persistent challenge. FMA pegged Internet penetration in the Philippines at just 35% to 40% of the 100 million population.

Undersecretary Louis Napoleon Casambre of the Philippine Department of Science and Technology (DOST) presented his department’s Free Wifi Internet Access in Public Places Project, which aims to connect 14 cities and 994 municipalities to the web. The project was launched this year.

“With the TV white space initiative, we can now complete the last connection. If all goes according to plan, in a few years, the Philippines will be 99% connected,” Casambre said.

The undersecretary added that last year, as much as 85% of public elementary schools were not connected to the Internet.

Yet blogger and former Kabayaan representative said that the DOST’s plan to limit the list of websites people can access, blacklisting sites, and designating site coordinators might be interpreted as a “form of censorship.”

Palatino also identified cyber-libel as another threat to free expression on the Philippine Internet. In the Philippines, libel is a criminal offense, meaning offenders may be sent to jail.

“We have a very restrictive libel law. Journalists complain that the original problem is the libel law,” Palatino said.

Rommel Feria, a faculty member at the University of the Philippines’ Department of Computer Science, raised the issue of net neutrality. The US-based Electronic Frontier Foundation (EFF) defines net neutrality as “the idea that Internet service providers (ISPs) should treat all data that travels over their networks equally.”

Feria questioned the practice of Filipino telecommunication companies of providing free Internet access to Facebook or Twitter at the expense of Internet speed for paying subscribers.

“Telcos can afford to provide free Internet access to favored sites and yet they fail to provide a certain quality of service to those who are paying,” Feria said.

Smart Communications was among those invited to the panel but did not appear. 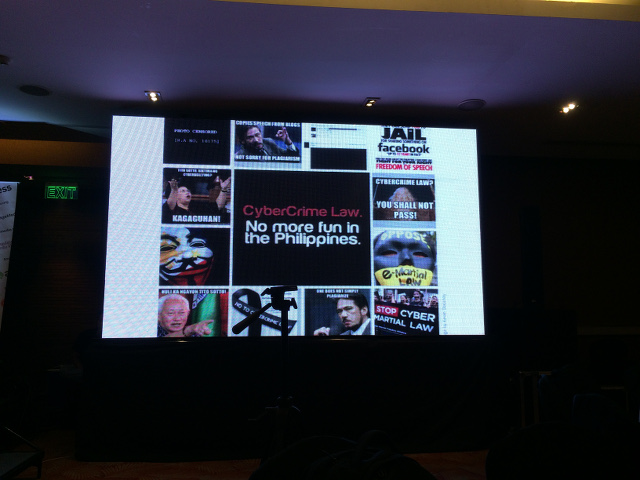 Despite the challenges to Internet freedom in the Philippines, FMA’s Dumlao said that the country still takes pride in Filipino netizens’ active participation in digital rights issues, as seen in the campaign against restrictive provisions of the Cybercrime Prevention Act of 2012.

International delegates cited the #notocybercrime campaign as one of the most successful campaigns in the Philippines and Southeast Asia in pushing for digital rights. Filipino netizens are also pushing for a Magna Carta for Philippine Internet Freedom (MCPIF), a crowdsourced bill that aims to protect the rights of Internet users.

In RightsCon, Filipino Internet users meet to craft a new initiative: the Philippine Declaration on Internet Rights and Principles. Dumlao said this is a document that will contain “the dreams, hopes, and aspirations of what the Philippine Internet should be.” The document is set to be launched in time for ICT month in June.

Another plan being discussed in the conference is creating a national Internet Governance Forum (IGF), patterned after the United Nations’ global and regional IGFs. The IGF gathers different stakeholders to discuss Internet governance and policies.

Dumlao said, “IGF is bottom-up. This is our attempt to have that space, to have stakeholders come together and we want to do this every year. Multi-stakeholder collaboration has been here for quite a long time but only informally. This is something we want to highlight.”

Globally, one outcome of RightsCon is the so-called Manila Principles on Intermediary Liability. It is an EFF-led framework that proposes “baseline safeguards” for intermediaries such as Internet access providers, social networks, and search engines.

(Click here to read and endorse the Manila Principles on Intermediary Liability.)

Dumlao said these initiatives illustrate the importance of global fora like RightsCon and IGF.

“We want to leverage this global conference for Filipinos to come together and talk about these things, and make sure our experience is connected to international issues.” – Rappler.com