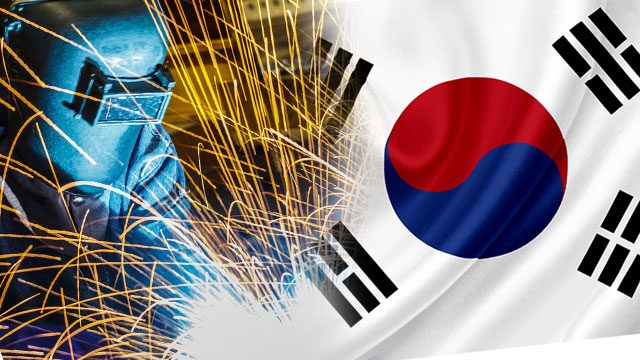 Facebook Twitter Copy URL
Copied
Although there is an overall decrease in the number of new migrant workers South Korea allowed in the manufacturing industry, the Philippine share grows

“This 2015 quota shows sustained demand for OFWs in the last 3 years in the Korean manufacturing sector,” Baldoz said.

The quota scheme in South Korea’s manufacturing sector is set by the Ministry of Employment and Labor (MOEL) under what is known as the Employment Permit System (EPS).

The scheme is limited to the mass-production industry and not applied in other industries in South Korea.

The ratio is determined by South Korean employers’ preference, the rate of undocumented workers from the said country, and its efficiency in managing the migrant workforce.

Baldoz said the “sustained demand” for OFWs in South Korean factories attest to the Philippine government’s efforts to curb the migration of irregular or undocumented OFWs.

The Philippines is a known labor-sending country, with 10 million Filipinos overseas, either as permanent migrants or as temporary workers.

Still, President Benigno Aquino III envisions “a government that creates jobs at home so that working abroad will be a choice rather than a necessity.”

Although there is an overall decrease in the number of new migrant workers MOEL allowed in the manufacturing industry, the Philippines’ share grew.

“We expect that this will become the trend that will harmonize with our efforts in continually advancing the credence of the Filipino workforce as globally competitive,” Baldoz said.

The 2013 Commission on Filipinos Overseas (CFO) Compendium of Statistics shows that some 68,911 Filipinos are in South Korea either permanently residing there or temporarily working with or without documents.

South Korea is also among the top 10 destination countries of permanent Filipino migrants from 2004 to 2013.

The only Asian countries to make it to the list are South Korea and Japan. – Rappler.com