Mar 27, 2015 11:24 AM PHT
Rappler.com
Facebook Twitter Copy URL
Copied
To grant the detained senator's request 'will not only set a bad precedent' but will also be a 'mockery of the administration of justice,' says the anti-graft court Sandiganbayan's First Division 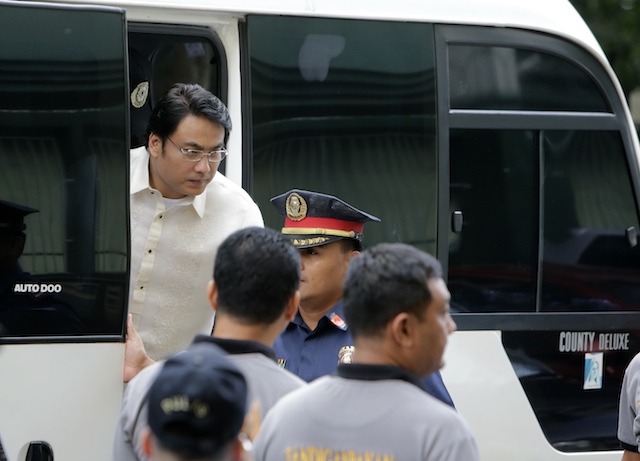 “The Court is not inclined at this time to treat as exceptional circumstance the commencement exercise of his daughter in Muntinlupa City,” the Sandiganbayan’s First Division said in its resolution released on Friday, March 27.

The court said that in its view, granting the petition “will not only set a bad precedent, but will likewise be regarded as a mockery of the administration of justice.”

Revilla had sought court permission to leave Camp Crame, where he is detained for plunder charges in connection with the pork barrel scam, to attend the high school graduation of his daughter, Ma Fraznel Loudette Bautista, at the De La Salle Zobel in Muntinlupa City on Saturday.

Revilla told the court that his daughter is set to receive 3 awards during the graduation rites.

The court also responded to the argument of Revilla’s lawyer that the senator’s request is being made “for the sake” of his daughter.

“Suffice to state that the Court cannot grant relief to a person who is not a party to this case,” the court said.

The Sandiganbayan’s 1st Division also said that while Revilla and others accused in the pork barrel scam are charged with plunder, a capital offense, the court had allowed them on several occasions to leave their detention facility but only for “exceptional circumstances.”

“In a number of occasions in the past due to exceptional circumstances, and for humanitarian consideration, the Court had allowed accused Revilla to undergo medical check-ups and to visit his ailing son in a hospital outside of his detention cell,” the court said. (READ: Bong Revilla visits son Jolo in hospital)

It added: “Under similar exceptional circumstances in the future, the Court will not hesitate to grant any motion that may be filed by accused Revilla and/or his co-accused to leave their detention cell.” – Rappler.com