MANILA, Philippines – With a little over a year left in his term, President Benigno Aquino III hits the lowest Social Weather Stations (SWS) satisfaction rating of his presidency.

A survey released by the SWS on Monday, April 6, showed that the first quarter 2015 satisfaction rating of Aquino dropped by 28 points from December.

This translates to a net satisfaction rating of +11, down from +39 in the last survey. This equates to “moderate,” a downgrade from his “good” rating. A moderate rating is anywhere between +10 to +29.

The results also showed a drop across all regions and socioeconomic classes.

Analysts say the survey, conducted from March 20-23, reflects the sentiments of the people after an operation against top terrorists in Mamasapano, Maguindanao, approved by the President left 44 elite cops dead. 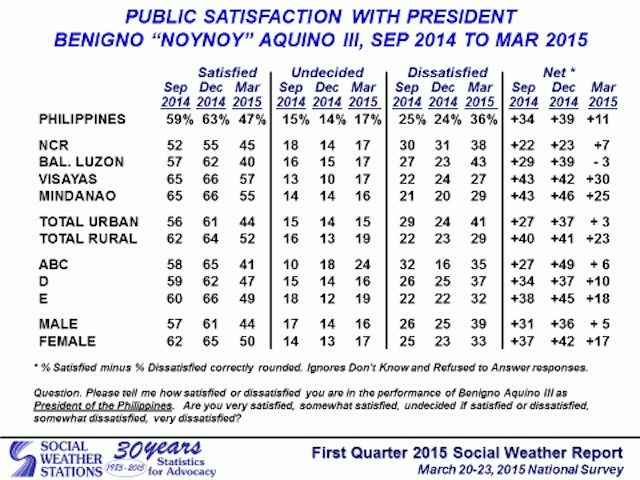 The survey also showed, however, that while many are dissatisfied with Aquino’s performance, 50% do not want him to resign. Resignation is an idea supported only by 32%.

Reacting to the results, Communications Secretary Herminio Coloma Jr acknowledged the decline, but drew attention to the fact that most do not want him to leave office prematurely.

“While there has been a decline in the President’s satisfaction rating (down to 47% from 63%), it is evident that a higher number of Filipinos – (50% who oppose his resignation; and 47% who expressed satisfaction) – affirm their belief in his leadership and outnumber those who are dissatisfied (37%) or prefer that he resign from office (32%),” he said in a statement.

“There is also a significant segment that is undecided about his performance (16%) and about his resignation (18%).  This represents an opportunity for reaching out to those who are undecided or ambivalent in their sentiments towards the President and the administration and eventually winning them over.”

The results are similar to an earlier one released by Pulse Asia, conducted from March 1 to 7, which also showed a huge slide in Aquino’s ratings following Mamasapano. But Coloma said the 3 weeks between that survey and this SWS poll may have been the reason for the slight improvement in numbers.

“It is possible that, having gathered more information about current events – and having been able to know and understand better the President’s position on the Mamasapano incident – the people gave the President a higher satisfaction rating in the SWS survey (47%)  than the performance approval rating that he obtained in the Pulse Asia survey (38%),” he said.

Coloma vowed the administration would not be discouraged by the results and would continues pursuing reforms.

“The President and his Cabinet are firmly determined to carry on with the implementation of salient reform and development programs geared toward achieving the primary objective of attaining inclusive growth and improving the quality of life of their bosses – the Filipino people,” he said.

“In the next 15 months, we will continue to stay focused on priority programs such as infrastructure development, employment generation, and poverty reduction and improved social protection. Transparent and responsive governance along the righteous path will be pursued, so that public institutions may be strengthened, the transformation process may be sustained, and that the concrete gains achieved will become permanent.”

Dissatisfaction in Mamasapano stemmed from what many viewed to be Aquino’s poor handling of the matter after the operation, and confusion over his role in the incident.

Aquino has said he would no longer speak on Mamasapano after airing his side in various occasions, following two separate reports on the incident by the police and the Senate that deemed him responsible. The President has refused to apologize for the bloody operation. – Rappler.com