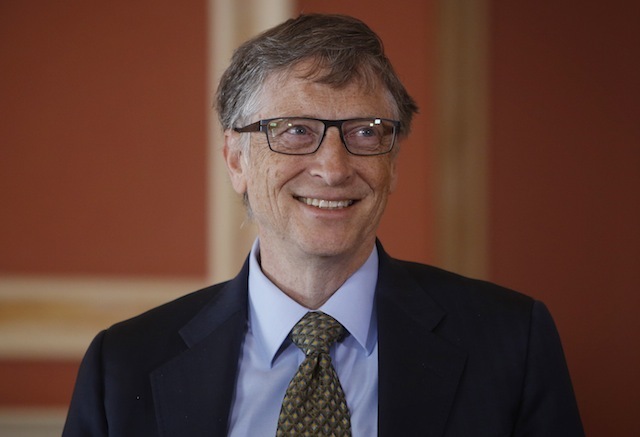 Tony Lambino, IRRI head of communications, neither confirmed nor denied the visit.

Lambino told Rappler, however, that Dr. Pamela Anderson, the agricultural development director of the Bill and Melinda Gates Foundation (BMGF) had been in IRRI since the weekend.

He said Anderson and other senior officers of the BMGF were in the country to get updates on the food and nutrition security programs the foundation is supporting, with an annual commitment of $18 million. The briefings of IRRI officials with Anderson concluded Wednesday morning.

“The foundation is IRRI’s largest philanthropic donor,” Lambino said in a text message.

Apparently, a private jet with registration number N887WM and tied to Gates, was in the country as early as April 4, Interaksyon.com reported.

An IRRI employee shared with Rappler that social media sites, like Facebook and Twitter, were blocked in the premises of the institute at around 8:00 am to 3:30 pm, before and after the chopper reportedly carrying Gates landed at IRRI. The chopper was at IRRI from 8:30 am to 3:00 pm, the employee shared.

Scientists at IRRI updated the BMGF team on advances in research on climate-change-ready rice and varieties that promise to help solve micronutrient deficiencies.

“We are thankful that the BMGF has come for updates on the food and nutrition security initiatives that they support,” said Robert Zeigler, Director General of IRRI.

“The foundation is a staunch partner in applying the best of science so that people in the rice-eating world will not go hungry.”

The foundation has invested in IRRI’s research for Golden Rice, a genetically modified crop that is seen to help solve hunger and malnutrition in developing countries. (READ: Golden Rice: The next GMO battleground)

“It is hoped that Golden Rice will help improve the health of millions of children and adults across the Philippines and Bangladesh,” the foundation said in a statement.

Environmental groups oppose the GMO-developed rice, warning of its potential hazardous impact to the environment.

The BMGF team was also shown experimental rice plots for the development of flood- and drought-tolerant rice. These varieties promise to improve the livelihoods of the world’s poorest farmers by ensuring a good harvest despite weather and climate upsets.

For instance, flood-tolerant rice are supposed to thrive even after more than 14 days underwater. Non-tolerant rice normally die after just 4 days of submergence.

BIllionaire philanthropist Gates, with an estimated fortune of $79.2 billion according to Forbes, stepped down as chairman of Microsoft in 2014, and has been since focusing on the Bill and Melinda Gates Foundation.

Co-chaired with wife Melinda, the foudation teams up with partners around the world to take on some tough challenges: extreme poverty and poor health in developing countries, and the failures of America’s education system.

“We focus on only a few issues because we think that’s the best way to have great impact, and we focus on these issues in particular because we think they are the biggest barriers that prevent people from making the most of their lives,” the Gates earlier wrote, explaining the foundation’s work. – with a report from Lynda C. Corpuz, Pia Ranada / Rappler.com