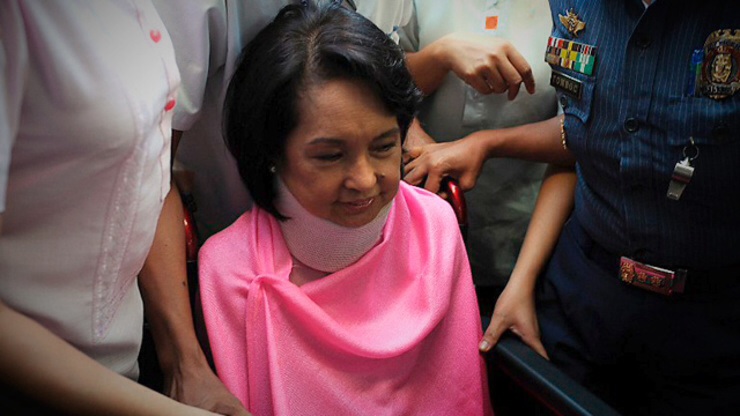 MANILA, Philippines – If former President Joseph Ejercito Estrada was allowed to be placed under house arrest while on trial for plunder, then so can former President Gloria Macapagal-Arroyo.

Citing humanitarian considerations, Arroyo’s lawyers made this argument in a motion filed before the Sandiganbayan First Division Wednesday, April 8, seeking to place Arroyo under house arrest.

Arroyo, who is now representative of the 2nd district of Pampanga, is currently detained at the Veterans Memorial Medical Center over a P366-million plunder charge.

She is suffering from “multiple cervical spondylosis” or the wearing off of the bones. The defense said Arroyo remains in a delicate condition.

In the motion, the Arroyo camp cited a precedent case when the same privilege was granted to Estrada in July 2004.

The anti-graft court allowed Estrada, now mayor of Manila, to be detained in his property in Tanay, Rizal, until September 12, 2007, when he was convicted of plunder.

Arroyo’s motion quoted 4 paragraphs from the Sandiganbayan resolution issued on July 12, 2004. According to the resolution, “the sole purpose of confining an accused in jail before the conviction is to assure his presence at the trial.”

Besides, the defense argued that a house arrest was allowed under the law.

“House arrest is not special treatment. She will be as much a prisoner at home as any other detainee is a prisoner in a prison facility or a hospital,” the motion said.

The Arroyo camp noted that Arroyo continues to enjoy the constitutional right to presumption of innocence  since she has not been convicted.

The former president wants to be detained in her house at La Vista subdivision in Quezon City.

In the case of Estrada, the court considered the security and privacy of residents in deciding between a house arrest in his residence in Greenhills or in Rizal.

Anticipating the same concerns, the Arroyo camp said a house arrest in La Vista would not threaten residents’ security.

“The best proof of this was President Arroyo’s 4-day Christmas furlough last December 2014, where her house arrest, while doing her much good, did not do any harm,” the motion said. – Angela Casauay/Rappler.com