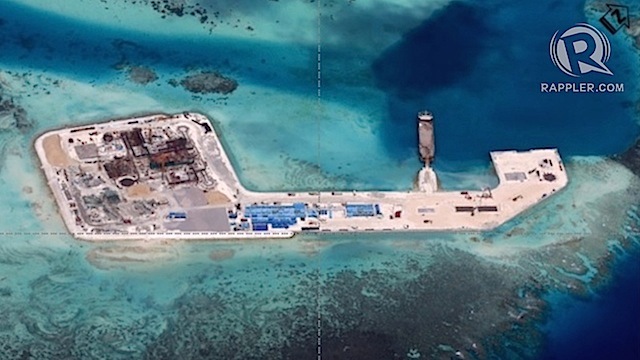 The Department of Foreign Affairs referred to recent US statements on China’s “massive reclamation activities” in the disputed area that have prompted diplomatic protests from the Philippines. (READ: CLOSE-UP PHOTOS: China’s artificial islands in West PH Sea)

“These statements, and those of other nations, reflect growing international concern over these reclamations that are contrary to international law…and undermine our collective efforts to build regional security and stability,” the DFA said.

The DFA specifically cited the 1982 United Nations Convention on the Law of the Sea (UNCLOS).

In late March, US senators led by John McCain urged Washington to craft a formal strategy to stop China’s reclamation in the disputed area.

The DFA said that the Philippines will continue to work with the Association of Southeast Asian Nations (ASEAN) “and other responsible members of the international community to address unilateral aggressive actions that directly challenge the rule of law, create tensions, and pose risks to the peace and stability of the region.”

The DFA again pushed for the “full and effective implementation” of the 2002 ASEAN-China Declaration on the Conduct of Parties in the South China Sea (DOC) and the early adoption of a binding Code of Conduct (COC).

“Developments in the South China Sea concern not only the claimant states and the region, but also the international community. All should contribute to efforts to establish a regional architecture based on the rule of law,” the DFA said. – Rappler.com