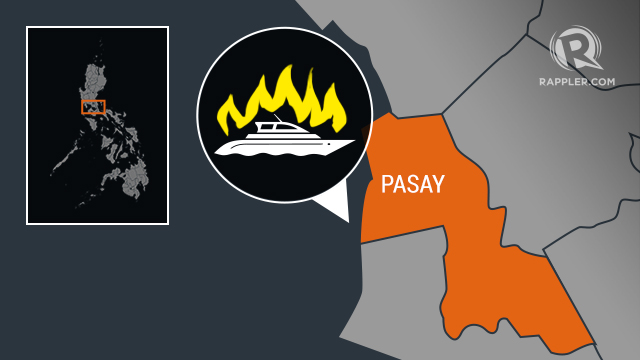 MANILA, Philippines – Two ferry boats sank after being engulfed in a fire while on dock at the seaside of the SM Mall of Asia (MOA) Complex in Pasay City on Sunday, April 12.

The fire started at 12:30 pm and immediately consumed the first boat, M/V Carmen, before it was declared under control by 2:30 pm, said Captain Daryl Vargas of the Philippine Coast Guard Station in Manila.

The 25-meter fiberglass ferry boat owned by Metro Star Ferry Inc., was moored beside another boat, M/V Dona Adelina, when the incident occurred. No casualty was reported.

“The vessels were totally consumed by fire and submerged in water, with only its steel structure visible,” Vargas said.

According to caretaker Rogelio Burgos, the fire originated from M/V Carmen’s engine room which was allegedly caused by a “spark in the generator.”

The SM MOA is one of the largest shopping malls in the Philippines. – Rappler.com