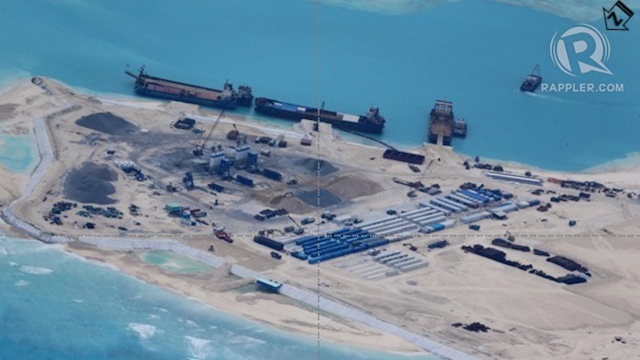 MANILA, Philippines – The Philippines on Monday, April 13, said it is considering to bolster its historic case against China by citing the Asian giant’s artificial islands in the disputed South China Sea.

“We’ll see if there’s an opportunity to do that, especially during the oral arguments,” Philippine Department of Foreign Affairs (DFA) spokesman Charles Jose said in a media briefing.

Jose was answering a question on whether the Philippines can include China’s reclamation as an argument in Manila’s historic case against Beijing.

The Philippines, after all, blamed China on Monday for “causing irreversible and widespread damage to the biodiversity and ecological balance of the South China Sea/West Philippine Sea” by conducting its reclamation activities.

In a statement, the DFA said China’s reclamation has destroyed 300 acres of coral reefs in the South China Sea – roughly twice the size of Rizal Park, the main park in the Philippine capital.

The DFA said the destruction of these coral reefs “is estimated to lead to economic losses to coastal states valued at US$100 million annually.”

These comments came after a newly released set of satellite images revealed that China is artificially expanding a reef in disputed waters, presumably to strengthen its territorial claims.

Jose pointed out that China conducted its reclamation “immediately after we filed the arbitration case” in January 2013.

This means the reclamation was not part of the 4,000-page memorial or pleading that the Philippines lodged against China in March 2014.

A year after it filed the memorial, the Philippines submitted a 3,000-page supplemental memorial against China before the arbitral tribunal at the Permanent Court of Arbitration based in The Hague, The Netherlands.

Jose said the supplemental memorial “was mostly an elaboration of the points that we submitted in the first memorial.”

The Philippines’ lawyer in its case against China, Washington-based Paul Reichler, earlier said the next step involves oral hearings possibly in July.

For now, Jose said, the Philippines is considering to file a diplomatic protest against China over these artificial islands.

The Philippines had filed diplomatic protests against China in the past, but China ignored these notes and continued to assert its claim on the South China Sea.

The DFA said in its statement Monday, “We should not allow China to distract us from the real issues in the South China Sea, which are China’s illegitimate ‘9-dash line’ claim, and China’s unilateral and aggressive behavior in asserting that claim, as exemplified by its massive and unrestrained reclamation.”

The DFA added that it is “especially concerned” about the Chinese Foreign Ministry spokesperson’s statement on Thursday, April 9.

In this statement, Chinese Foreign Ministry spokesperson Hua Chunying said, “After the construction, the islands and reefs will be able to provide all-round and comprehensive services to meet various civilian demands besides satisfying the need of necessary military defense.”

“Such statements by China only serve to raise the specter of increasing militarization and threaten peace and stability in the region,” the DFA said. – with a report from Agence France-Presse/Rappler.com