Talks begin on how to implement ‘revolutionary’ fisheries law Facebook Twitter Copy URL
Copied
A committee, composed largely of commercial fishers, tackles the implementation of a law that imposes much higher penalties for illegal and unregulated fishing

MANILA, Philippines – Stakeholders from the fisheries industry, civil society, government, and the academe gathered on Monday, April 13, for the first consultation on the implementing rules and regulations (IRR) of the new fisheries law, Republic Act 10654.

Chaired by Bureau of Fisheries and Aquatic Resources (BFAR) Undersecretary Asis Perez, the committee finalized procedures and ground rules for the series of meetings that aim to produce a draft set of IRR.

The IRR must be signed by September 24, or 6 month after the law was published in two newspapers in February. Only then can the law be fully implemented.

One of the most contentious issues brought up during the meeting was on the composition of the committee.

Of the 31 initial seats of the committee, 18 were given to commercial fishers who, Perez said during the meeting, were “definitely the sector most affected by the law.”

Nine of the seats went to government agencies, two to civil society organizations (CSO), and two to the academe.

Arnold Naval, the legal counsel of the Philippine Alliance of Fishing Federations, raised the need for more seats to accommodate other commercial fishing federations.

Up to that point, all 18 seats were given to a single commercial fishing federation. For instance, the Socsksargen Federation of Fishing and Allied Industries Incorporated (SFFAII), one of the largest fishing alliances with 100 companies as members, was not given seats.

Further deliberations led to changes, which expanded the membership. The finalized composition of the committee is as follows: 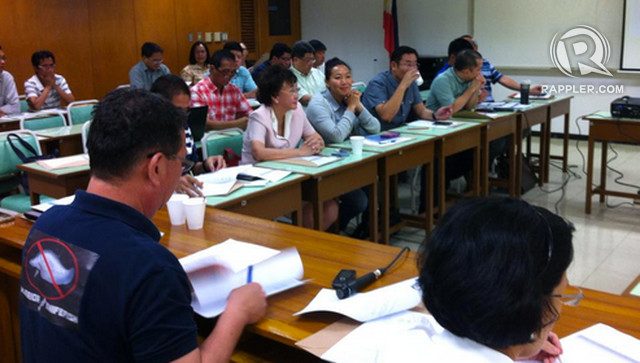 Calvan was also concerned that the overwhelming majority given to the commercial fishing sector would make it possible for them to prevent the attainment of quorum and delay the finalization of the IRR.

But Perez gave his assurances that if there is a “deliberate attempt” to derail the process, he, as chair, will decide to continue with the meeting even if quorum is not technically achieved.

The committee plan to meet every two weeks until early August, with each meeting lasting two days.

The target, said Perez, is to submit the draft IRR to Agriculture Secretary Proceso Alcala, whose signature upon the document promulgates it.

The new fisheries law, an amendment of the Fisheries Code of 1998 (Republic Act No 8550), has grave implications for all stakeholders in the fishing industry, most notably commercial fishers.

Its most striking features are much higher penalties for crimes that fall under illegal, unreported, and unregulated (IUU) fishing.

For fishing in marine protected areas, operators large-scale fishing vessels (above 150 gross tons) will be fined P1 million ($22,400) or twice the value of the ship’s catch.

For failure to secure a fishing permit before fishing in distant waters (or foreign waters), large-scale fishing vessel operators can be fined P16 million to P45 million  ($358,000-$1 million) or 5 times the value of the ship’s catch.

Under the new law, commercial fishers are also supposed to shoulder expensive vessel monitoring equipment to be installed in their boats so that they are easily traced by the government’s monitoring, control and surveillance system.

If government suspects them of violations, the fleet’s operations might be ordered temporarily stopped without any judicial proceeding.

Perez called the law “revolutionary” for a developing country, saying even the highest penalties of a new fisheries law by South Korea, a major fishing country, do not exceed half a million pesos.

A clear IRR, he said, would be in the best interest of the commercial fishing industry.

The commercial fishers present made it clear that they wanted to protect the viability of their business.

“I believe we got a bigger ratio because we were not consulted when the law was made. The NGOs are not going to lose their business and the livelihood of its fisherfolk,” she said.

Perez assured the commercial fishers the IRR would strive to introduce provisions that would “cushion” the revolutionary aspects of the law so that it would not be abused to the detriment of commercial fishers.

The sector had dialogued with President Benigno Aquino III in November, asking him to veto the law, calling its provisions “oppressive and confiscatory.”

The civil society groups present, meanwhile, want to prevent a watering down of the law.

“It’s quite a strong law. We want the IRR to preserve the spirit of the law,” said Shannon Arnold of farmer and fisherfolk alliance PAKISAMA.

The next consultation is scheduled to take place from May 7 to 8.

The new fisheries law was crafted to prevent trade sanctions from the European Union and to enable the Philippines to live up to its commitments to the United Nations.

It lapsed into law on February 27, a month after it was submitted to the Office of the President by the Congress’ bicameral committee.

Both the UN and the EU have stepped up efforts to combat IUU fishing – blamed for unsustainable fishing practices that have led to overfishing. (READ: PH oceans in crisis: The sad state of small fisherfolk)

In the Philippines, the outdated Fisheries Code of 1998 and its weak implementation left much room for IUU fishing.

Some commercial fleets have been able to fish where they are not supposed to – in municipal waters reserved for municipal fisherfolk.

Some commercial fishing operations are also known to engage in underreporting or misreporting of fish catch to defy constricting quotas and be able to sell more fish illegally.

The new law aims to prevent such practices by ensuring the traceability of all the catch of Philippine-flagged fishing vessels through a Monitoring, Control and Surveillance System.

This includes equipment that can detect where all fishing vessels are operating at any given time, putting observers on fishing vessels to record their catch, and a catch certification system to be implemented from fish ports.