The Chief Justice himself is present at the Senate session hall, accompanied by his wife Cristina, and Supreme Court (SC) spokesperson Midas Marquez. The public also gets to know the people who will represent both the defense and the prosecution.

Here are the highlights of the first day.

Around 11:25 am: Chief Justice Corona speaks to court employees after a Thanksgiving Mass and a rally to support him. In his speech, Corona hints at three personalities leading efforts to remove him from office: one related to “Hacienda Luisita,” another “wanting to become vice-president,” and another one “wanting the chief justice post.” His references point to President Aquino, DOTC Secretary Manuel “Mar” Roxas II, and Associate Justice Antonio Carpio. 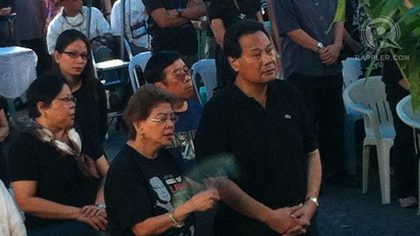 Corona also defends himself on the issue of the alleged properties he and his wife own, saying he has only five, not 45. He also discusses the World Bank aide mémoire. He says in his speech, “Wala itong atrasan (There is no turning back).”

The Senate, meanwhile, holds a caucus, where they tackle the motions relating to the impeachment trial. After Corona’s speech at the SC, the defense panel holds a press conference, where they discuss the possibility of filing a temporary restraining order with the SC.

Around 12:55 pm: Members of the House prosecution panel and Chief Justice Corona are on their way to the Senate. 1:12-1:15 pm: Prosecution and defense teams, Corona arrive separately at the Senate. Corona, accompanied by his family, evades the media.

Throughout the afternoon, protesters supporting and opposing the trial hold protests in the vicinity of the Senate. 2:00 pm: People begin settling down inside the session hall.

2:12 pm: Senator-judges, wearing their ceremonial robes, enter the session hall. Absent are Senators Miriam Defensor-Santiago and Loren Legarda: Santiago called in sick due to hypertension, while Legarda is abroad, accompanying her mother who is seeking medical treatment.

In his opening statement, Enrile says that the impeachment trial is a “constitutional mandate and duty” which they should not postpone or evade. He reminds the senator-judges to closely and diligently examine the evidence, and tells everyone that the trial will be bound by rules.

“Our job is to render a just verdict based on no other consideration than the facts presented to us, and our individual moral convictions,” he says.

He also urges the Senate to “see this process all the way to its conclusion.” “Let us finish the job,” he says.

3:08 pm: Opening statements of prosecution and defense. Rep Tupas delivers the opening statement of the prosecution. He says they are in the trial “to search for the truth to restore the independece of the judiciary,” and outlines their arguments.

For the defense, private lawyer Eduardo delos Angeles delivers the opening statement. The defense argues that the case is due to the current administration’s antagonistic view of the current Supreme Court leadership, and refutes the arguments of the prosecution.

3:33 pm: Sen Vicente Sotto III brings up the motion for contempt filed by a certain Fernando Perito. Enrile dismisses the motion, saying Perito has no standing in court.

3:36 pm: Enrile warns both sides to forego discussion and presentation of evidence outside the impeachment court.