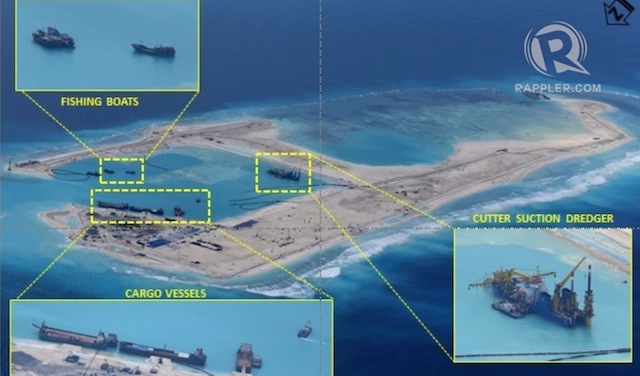 MANILA, Philippines – Satellite images taken last week and shown on the website of the Washington-based Center for Strategic and International Studies (CSIS) indicate the status of the airstrip that China is building on reclaimed land in the West Philippine Sea (South China Sea).

This is going to be China’s first runway in the disputed territory; it is on Kagitingan (Fiery Cross) Reef. It is estimated to be 3,110 meters in total length, and is more than one-third complete, the report said.

The West Philippine Sea is already dominated by Chinese ships. An airstrip will allow Chinese planes, including even fighter jets, to land on the artificial island and get very near the country. Harbors can also host tankers and other sea vessels.

Fiery Cross was little more than a reef when China began to turn it into an island in late 2014.

Less than 4 weeks earlier, CSIS said two sections of 468 meters and 200 meters were under construction.

“Before this construction China lacked the refueling and resupply capabilities to reach the southern part of the South China Sea,” it added.

“While they have not yet been built, Fiery Cross should be big enough to accommodate hangar facilities for Chinese aircraft.”

China claims nearly all of the South China Sea according to lines on maps published in the 1940s – locking it into disputes with several Southeast Asian neighbors.

Its island-building in the Spratlys, also claimed in whole or in part by the Philippines and Vietnam among others, has been seen as part of an attempt to assert its territorial claims.

Beijing quickly dismissed his comments as “groundless,” adding that China’s construction “does not impact or target any other countries.”

Last November, the United States warned that the Fiery Cross project could accommodate an airstrip.

“We urge China to stop its land reclamation program, and engage in diplomatic initiatives to encourage all sides to restrain themselves in these sorts of activities,” military spokesman Lieutenant Colonel Jeffrey Pool said.

Vietnam, the Philippines, and Malaysia have asserted their own claims by stationing troops in the Spratlys and building airstrips there from the 1970s onwards.

US President Barack Obama warned last week that Beijing should not “elbow aside” countries it is in dispute with in the South China Sea. – with reports from Agence France-Presse