US to PH: War games ‘sharpening the sword and the bolo’ vs bullies

Apr 20, 2015 8:00 PM PHT
Carmela Fonbuena
Facebook Twitter Copy URL
Copied
'We are honing our lethal military skills...to allow us to assist each other as well as other nations should the need arise,' says Brigadier General CJ Mahoney of the US Marine Corps Forces in the Pacific 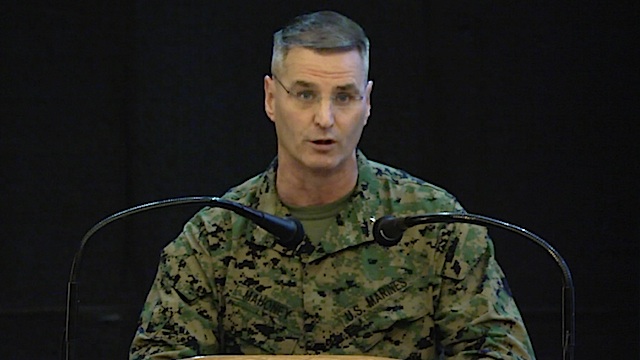 MANILA, Philippines – The biggest Balikatan war games in 15 years kicked off on Monday, April 20, against the backdrop of China’s continuing reclamation activities in the West Philippine Sea (South China Sea).

Beijing’s activities have alarmed not only claimant countries but others that use the sea routes for trade and commerce.

The deputy commander of the United States Marine Corps Forces in the Pacific, Brigadier General CJ Mahoney, stressed the need to hold exercises not only with the Philippine military but with other allied militaries in the region.

“We are also honing our lethal military skills, the core elements of the profession of arms, to allow us to inter-operate and cooperatively assist each other as well as other nations should the need arise,” Mahoney said in his speech at the opening ceremonies of Balikatan 2015.

Mahoney echoed the US position against China’s unilateral actions. (READ: China’s neighbors must not be ‘elbowed aside’)

“We are sharpening the sword and the bolo. We have a great opportunity over the next couple of weeks to develop and deepen the personal and professional relations that are hallmark to the generation of balikatan exercises. It shows what we stand for. What we don’t stand for is aggression, coercion, or bullying,” Mahoney added

Nearly 12,000 troops, about 6,500 of them Americans, are participating in 56 field training exercise events including maritime exercises.

Australia is also participating with 70 troops, while a number of countries with maritime dispute with China – Japan, South Korea, and Vietnam among others – sent observers.

The US has a categorical commitment to come to Japan’s aid if Senkaku is attacked. It’s a commitment that the Philippines has been aspiring to get from its oldest treaty ally. In the case of the West Philippine Sea, the US supports the country’s arbitration case against China and has been vocal in opposing China’s reclamation activities. (READ: How far will the US go to defend the Philippines?)

“Balikatan demonstrates the Philippine’s, America’s, Australia’s, and all other regional participants’ commitment to promoting security and stability across the land. In military operations, our marines, airmen, sailors and soldiers are training to ensure that we can work together shoulder to shoulder to provide a secure environment and respond together to natural and man-made threats,” Mahoney said.

While US ambassador to the Philippines Philip Goldberg stressed that the war games are not targetted at specific countries, he upheld US commitment to assist the Philippines boost is maritime security capabilities.

“We make no pretence that we are helping the Philippines as it fields a minimum credible defense and pretext its maritime security. To be clear the US is committed to its alliances and, in the case of the Philippines, our oldest in the region, that commitment is, as President Obama has said, ironclad,” Goldberg said at the Balikatan opening.

“At the same time, the US will always defend the important principles of freedom of navigation in the air and the sea and the peaceful resolution of disputes through legal, diplomatic and peaceful means,” he added.

The Balikatan war games come a week shy of the anniversary of the signing of the Enhanced Defense Cooperation Agreement (EDCA), a deal that will expand US presence in the Philippines by allowing them to build facilities inside military bases and letting them preposition defense assets. The deal is still pending before the Supreme Court over constitutionality issues. (READ: Gentle push for EDCA as US war games begin)

It’s also the first time that the Philippine military assigned a high-ranking officer as Balikatan exercise director. It’s no less than the commanding general of the Palawan-based Western Command (Wescom), Vice Admiral Alexander Lopez, who has operational responsbility over the West Philippine Sea.

It’s a new rule. “The AFP exercise director shall come from the commander of the unified command having the focus of the exercise,” Lopez said.

One of the highlights of the Balikatan exercises, the Command Post Exercise, will be held in Wescom. Vice Admiral Lopez and Brigadier General Mahoney and lead their staff in demonstrating the decision-making process in a case where an enemy invades an imaginary island.

“It’s a generic scenario. We are an archipelagic country, anywhere any threat any country that would threaten the philippines, will face that scenario,” said Brigadier General Rodolfo Santiago, AFP assistant director for Balikatan 2015.

The Philippine military has previously offered Oyster Bay as an outpost that US troops can occupy under EDCA. It’s a strategic outpost that serves as jumpoff point for vessels en route to West PH Sea.

Maritime exercises will also be held this week in the coast of Zambales, another  province facing the West Philippine Sea. – Rappler.com