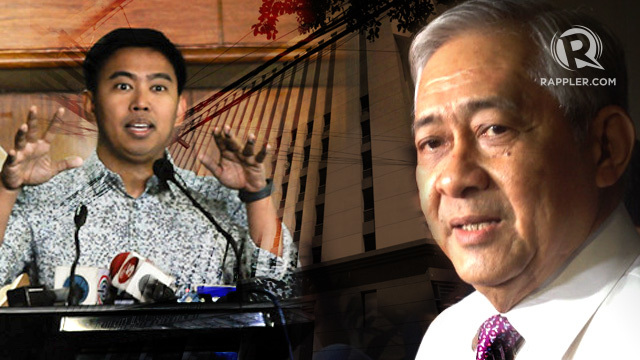 Aside from Jardeleza, Associate Justices Presbitero Velasco Jr and Arturo Brion likewise recused themselves from the case.

In a press conference on Tuesday, April 21, SC Spokesperson Theodore Te said the 3 justices did not provide him the reasons for thier inhibition.

Previously, Associate Justice Diosdado Peralta had already inhibited from the case and did not participate in the first round of oral arguments.

This leaves 11 justices voting on the high-profile case against the Makati mayor, who argued that his suspension was issued by the Ombudsman with grave abuse of discretion.

This also means that Jardeleza would have to be replaced as the justice who will pen the decision on the Ombudsman petition.

The Binay case before the SC stems from a petition filed by Ombudsman Conchita Carpio Morales through the Solicitor-General against a Court of Appeals 60-day temporary restraining order and a subsequent preliminary injunction against the Ombudsman-ordered 6-month suspension of Binay.

While the justices did not publicly disclose their reasons, a number of them have already recused themselves in a petition involving a member of the Binay political family.

In a petition raffled off to the SC Third Division seeking to stop the cases of Binay’s mother Elenita, SC Associate Justices Presbitero Velasco Jr and Diosdado Peralta had also inhibited.

The resolution on the Third Division case said the two justices took “no part” in voting “due to their relationship with a party.”

Jardeleza, for his part, has inhibited in many cases before the SC during his first few months as SC justice due to his previous involvement as then Solicitor-General.

Before being appointed to his present post, Jardeleza had argued alongside now Solicitor-General Florin Hilbay many times in the past.

Likewise, Jardeleza had earlier petitioned the SC for the abandonment or revisiting of the condonation doctrine, which Ombudsman Morales now wants the SC to revisit.

The condonation doctrine is a legal defense absolving re-elected officials of liability in administrative charges.

Morales has asked the SC to revisit this doctrine in light of the Binay case.

The Makati mayor had cited the controversial doctrine in arguing against his suspension.

The Ombudsman believes such a line of thinking is misplaced, as the suspension is a mere preventive measure and not a penalty. (READ: Binay reelection not an argument vs suspension – Ombudsman)

During his time as Solicitor-General, Jardeleza had argued before the High Court he is now a member of, that the principle is unfounded.

“That re-election condones previous misconduct of an elective office makes no sense,” his 73-page petition he filed read.

“We stand the possibility of being confronted with the stark reality that an official may amass wealth through graft and corruption and thereafter use the same to purchase re-election and thereby launder his evil acts,” he added. – Rappler.com