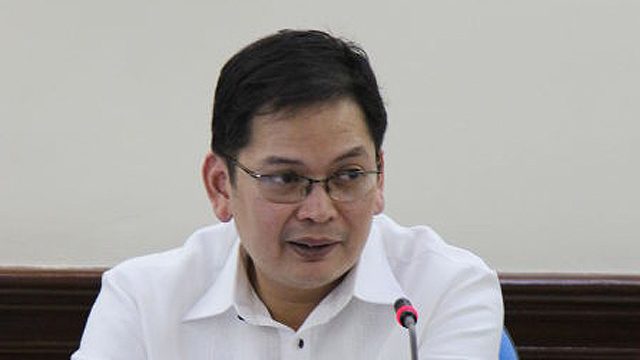 Facebook Twitter Copy URL
Copied
(UPDATED) 'I don’t compromise on morality.' This is the closest Commissioner John Sevilla gets to addressing persistent talks why some camps within the Aquino administration want him out.

MANILA, Philippines (UPDATED) – Commissioner John Sevilla vowed on Wednesday, April 22, that the Bureau of Customs (BOC) will not be used by political camps for campaign fundraising as long as he is at the helm of the agency.

Sevilla said he will make sure the bureau will continue to conduct dealings “fairly” and won’t let it be used in extortion activities.

This was the closest that Sevilla got to addressing persistent talks why some camps within the Aquino administration want him out. Sources tell Rappler that Sevilla could be standing in the way of these groups who want to turn the tax-collecting agency into a milking cow for elections.

“I don’t compromise on morality. The law is clear on what is allowed and not,” the commissioner said.

The Philippines will hold its presidential, national, and local elections in May 2016. A year before an election, political parties traditionally start raising funds, either by soliciting donations from businessmen or, in the case of those with connections in government, by using funds from various agencies.

“We are changing that, and I think we have done a lot to change that… Whether it is an election year or not, politician or not, corruption is wrong. Period. We should fight it,” Sevilla said.

Factions within any administration have been known to battle over control of the BOC, given opportunities for extortion. During Sevilla’s term, he revealed, he also received calls from politicians and government officials who asked favors – like hiring people they endorsed, promoting employees, and releasing smuggled shipments – which he rejected.

“All of you are entitled to the best possible service. Once the process is efficient and fast, no need to make a call…. Everybody should be treated fairly, but I don’t believe that people should be given special treatment,” he said.

In his 2013 State of the Nation Address (SONA), President Benigno Aquino III minced no words in shaming the agency widely perceived to be the most corrupt in government.

He said then: “Here we have the Bureau of Customs, whose personnel are trying to outdo each other’s incompetence. Instead of collecting the proper taxes and preventing contraband from entering the country, they are heedlessly permitting the smuggling of goods, and even drugs, arms, and other items of a similar nature into our territory.

In 2014’s SONA, Aquino changed his tone, and praised BOC for responding to the fixes required to revamp the agency, among them, officials from other departments and government agencies, who were asked to transfer to Customs because of their integrity.

“Who would have said yes to taking on these seemingly insurmountable challenges, and without the guarantee of success? Some passed on promotions. Some expressed fears of being targeted by syndicates, in retaliation for the reforms. But, ultimately, they heeded our call to serve. It is only right that I take this opportunity to personally thank these officials, under the leadership of Commissioner Sunny Sevilla,” Aquino said in his last year’s SONA. – Rappler.com