Apr 23, 2015 1:38 PM PHT
Rappler.com
Facebook Twitter Copy URL
Copied
The Davao City mayor, who is being groomed for a presidential bid, says relying on the United States is not enough to defend the Philippines’ maritime territory 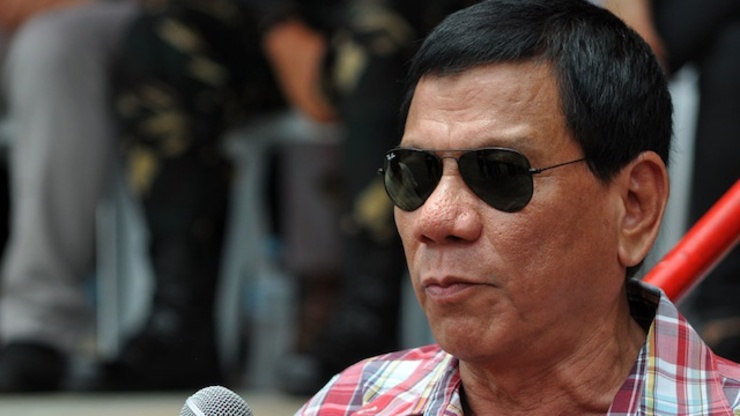 MANILA, Philippines – Rodrigo Duterte, mayor of the country’s largest city and a possible presidential candidate in 2016, proposed the revival of mandatory military training for male college students to augment government forces in the face of Chinese aggression in the disputed West Philippine Sea (West Philippine Sea).

In a statement on Thursday, April 23, Duterte said the Reserved Officers Training Course (ROTC) can help “build up a credible self-defense force” because the Philippines cannot rely solely on its mutual defense treaty with the United States.

“Our young men are presently too preoccupied with texting, Facebook, and other social media diversions that they don’t even know how to handle a rifle like we used to during our time,” he said. Duterte had his ROTC at the Lyceum of Manila.

Duterte said that if properly implemented, the ROTC can instill “discipline, nationalism, and the patriotic duty” in young men – values that will prepare them should China become more aggressive in claiming maritime territories that the Philippines is also claiming.

The ROTC was abolished after a University of Santo Tomas student was murdered for exposing alleged corruption in the school’s military training program. In 2002, undergoing ROTC became voluntary.

China has been building structures and reclaiming areas of the West Philippine Sea to reinforce its 9-dash claim on the territory that is clearly within the United Nations-recognized exclusive economic zone of the Philippines. (IN PHOTOS: China’s reclamation in West PH Sea as of April 2015)

The Philippines has expressed alarm over the de facto fishing ban that China’s presence has imposed on the area, as well as the possibility of the reclamation cutting access to the West Philippine Sea.

The United States condemned the actions too, prompting Beijing to call the Philippines the “cute little submissive” of the US.

The G7 – foreign ministers of Canada, France, Germany, Italy, Japan, the United Kingdom, US, and the High Representative of the European Union – expressed strong opposition to “any attempt to assert territorial or maritime claims through the use of intimidation, coercion, or force.”

Manila expressed hopes that ASEAN would issue a similar statement against China.

While urging an improved defense capability for the Philippines, Duterte said the next president should “be rethinking foreign policy vis-a-vis China by considering joint exploration for oil and gas with China and other claimant countries.

His inclination for joint exploration in the area is similar to Vice President Jejomar Binay’s. Another presidential aspirant, Binay has said the Philippines needs Beijing because the Asian giant has money when Manila needs investments.

During the time of President Gloria Macapagal Arroyo, the executive bypassed the Senate for approval of a questionable joint marine seismic undertaking (JMSU) with China and Vietnam. The Supreme Court eventually declared the agreement unconstitutional, but the mapping activity had been completed by that time.

The agreement was originally just between the Philippines and China, but it was amended to include Vietnam after the latter protested.

“We have enough peace and order problems in Mindanao and we don’t need to add an external security threat by saber-rattling against China,” Duterte said, explaining his position.

He also expressed concern for Filipino fishermen whose livelihood are threatened by Chinese activities off the coasts of Pangasinan and Zambales, province north of Manila. Fishermen reported being attacked by Chinese ships with water cannons when they tried to fish in Philippine waters.

Negotiating with China should allow claimant countries to share in the rich maritime resources that the area can offer, he said.

The Philippines has brought the maritime dispute with China before an international tribunal, a move that angered Beijing. The Asian neighbor has snubbed the proceedings. – with a report from Miriam Grace Go/Rappler.com