Apr 23, 2015 5:20 PM PHT
Rappler.com
Facebook Twitter Copy URL
Copied
If former secretary Hillary Rodham Clinton had been called a ‘funny lady’ in the course of her drive to find peaceful solutions and creative compromises in one area of conflict, I, in turn, had been called a 'dumb bitch', says Ferrer 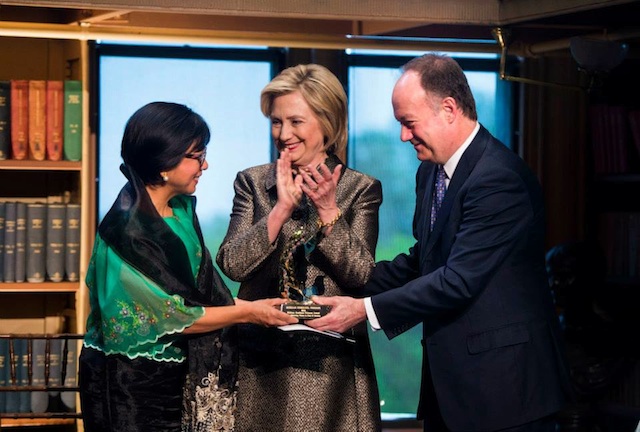 She received the award from Hillary Clinton herself on Thursday, April 23 (Wednesday, United States time) at Georgetown University in Washington DC. Clinton recently announced her presidential bid for the 2016 US elections.

Ferrer holds the distinction of being the first female chief negotiator in the world to sign a final peace accord with a rebel group. It is for this historic achievement that she was chosen for the award, said Ambassador Melanne Verveer, executive director of the Georgetown Institute for Women, Peace and Security, and former US ambassador for Global Women’s Issues.

In her acceptance speech, Ferrer narrated the difficulties she encountered when she took the helm of the peace table for the government, especially when the clash in Mamasapano, Maguindanao occurred.

Before an international audience, the chief negotiator delivered a passionate speech assailing the “bigotry” and “misogyny” that, she said, surfaced following the clash that killed 67 Filipinos.

The incident also endangered the passage of the proposed Bangsamoro Basic Law (BBL), which implements the final peace deal.

“As I speak right now, the ceasefire remains in place. But the vision of lasting peace is being shut out by the narrow horizons of certain political elites, and by a public fed with misinformation and driven by prejudices bordering on Islamophobia,” Ferrer said.

“And misogyny too. If former secretary Hillary Rodham Clinton had been called a ‘funny lady’ in the course of her drive to find peaceful solutions and creative compromises in one area of conflict, I, in turn, had been called a ‘dumb bitch,’ a traitor and a weak negotiator who bartered away the country to the Muslims/Moros,” she added.

Despite the difficult road ahead, Ferrer said there is no turning back for her.

“I am now a grandmother – my granddaughter, along with my sister Sheila Coronel, are here with me today. I don’t want Kaleigh Ysabelle here to inherit a country divided by prejudice, dishonored by sexism, and stunted by the narrow vision of members of its political class,” she said.

“I have met many, many grandmothers in Mindanao who reject the same, and ask for respect and dignity for all,” she added.

Ferrer is sharing this year’s award with Ambassador Staffan de Mistura, who was appointed in July 2014 by UN Secretary-General Ban Ki Moon as Special Envoy to the Syria Crisis.

Previous recipients of the award include British Foreign Secretary William Hague, who organized the Global Summit to End Sexual Violence in Conflict held in London in June 2014.  – Angela Casauay/Rappler.com