MANILA, Philippines – After holding two more hearings focusing on the security provisions of the proposed Bangsamoro Basic Law (BBL), the ad hoc House of Representatives committee remained adamant about deleting unique provisions on the creation of a regional police body.

The Philippine National Police, the National Police Commission, and the Department of the Interior and Local Government on Thursday, April 23, reiterated their support for the security provisions of the BBL. Their positions failed to convince lawmakers opposed to the bill.

Article XI creates a Bangsamoro Police that will continue to be part of the Philippine National Police. Unlike other local police units, however, the BBL elevates the operational control and supervision over the local police to the Bangsamoro chief minister and away from the mayors. This is an aspect of the measure that some lawmakers oppose, saying it is against national laws.

Cagayan de Oro Representative Rufus Rodriguez said the committee he chairs will axe these provisions because they run counter to existing laws.

“Yes, we have to go back again to primary responsibility on public order and safety being with the national government. It cannot be given to the Bangamoro,” Rodriguez said. “Operational control and supervision also, because it is in conflict with the local government code.”

Deputy Speaker and Batanes Representative Henedina Abad, however, has a different interpretation of “primary responsibility.” She said giving this power to the Bangsamoro government could just mean an initial response that could be revoked by a higher authority.

The fog of Mamasapano was still apparent during the hearing. Lawmakers raised concerns that provisions giving additional powers to the chief minister over the police could be interpreted that the PNP chief needs to coordinate with him before any operation can be carried out in the Bangsamoro region.

Proponents of the law earlier said that, in case of disputes, it is the PNP chief or the national government that will prevail over the Bangsamoro.

Lawmakers also raised concerns about the “intergovernmental relations” mechanism included in Section 1 of the BBL.

Rodriguez said the mechanism puts a “stumbling block” to police operations. He interpreted it as requiring the PNP to coordinate with the chief minister before undertaking any operations.

But government peace panel lawyer Al Julkipli said the intergovernmental mechanism “is not envisioned to be an ad hoc mechanism that will only crop up when there are specific issues.”

“It is designed to set institutional protocols that will govern future situations. It will not address specific issues but make processes between the Bangsamoro government and the central government uniform,” Julkipli said.

Magdalo Representative Gary Alejano said there is a need to clarify the meaning of intergovernmental relation mechanism, lest it leads to “perpetual negotiation” between the regional and central governments.

The intergovernmental relation mechanism and may also apply to possible disputes arising from differences in legislation and other policies.

The BBL seeks to create a new autonomous region in Muslim Mindanao with more teeth than the current one in place. 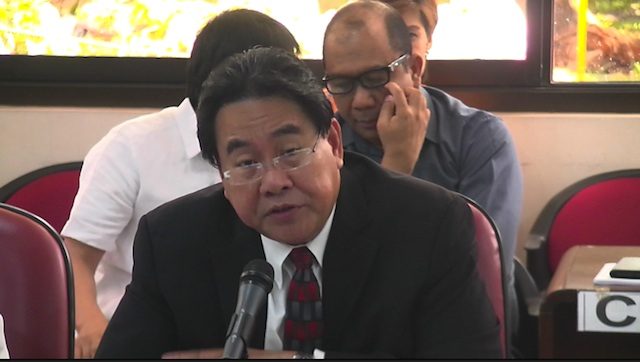 Zamboanga Representative Celso Lobregat said elevating operational control and supervision over the local police from mayors to the Bangsamoro chief minister violates the autonomy of local government units as provided under the Local Government Code.

But Napolcom’s Escueta argued that the proposal does not run counter to the existing PNP and local government laws since the functions provided continue to remain under local executives.

Lobregat later corrected Escueta. He said that it is mayors and city mayors who are deputized members of the Napolcom, and not the governor.

During the hearing, Lobregat and Antipolo 2nd District Representative Romeo Acop chided officials of the DILG, the PNP, and the Napolcom for allegedly hesitating to voice out their real concerns over the measure.

All throughout the hearing, the officials maintained that they supported the BBL as is. But Lobregat said the department – back during the first few hearings of the committee – raised concerns that the envisioned regional police arrangement could undermine the powers of the chief PNP.

Unlike the 1996 peace pact between the government and another rebel group, the Moro National Liberation Front, the Comprehensive Agreement on the Bangsamoro with the Moro Islamic Liberation Front does not provide for the integration of combatants into the police and the army.

Instead, it provides for a gradual decommissioning process that is linked with stages of the political process.

Police Chief Superintendent Edgardo Ingking said combatants who would want to join the police would have to pass through the standard recruitment procedure.

What will happen to the existing regional police office of the ARMM? Will it be dissolved, absorbed, or will it just remain?

Napolcom Vice Chairman Eduardo Escueta said the BBL is “silent” on this matter, so existing laws will prevail.

“We are now working on the existing ARMM police that will be transformed into the Bangsamoro police,” Escueta said.

The passage of the BBL in Congress and a subsequent plebiscite marks the second stage of the peace process after the signing of the peace agreement. However, the future of the bill was placed in danger following the political fallout due to the Mamasapano clash.

The ad hoc committee on the Bangsamoro is set to conduct another public hearing on Monday, April 27. The expected resource speakers are the members of the Malacañang-backed peace council. – Rappler.com