Apr 28, 2015 8:24 PM PHT
Carmela Fonbuena
Facebook Twitter Copy URL
Copied
In oral arguments in November 2014, magistrates looked for a categorical US commitment to aid the Philippines in its maritime row with China. There was none. 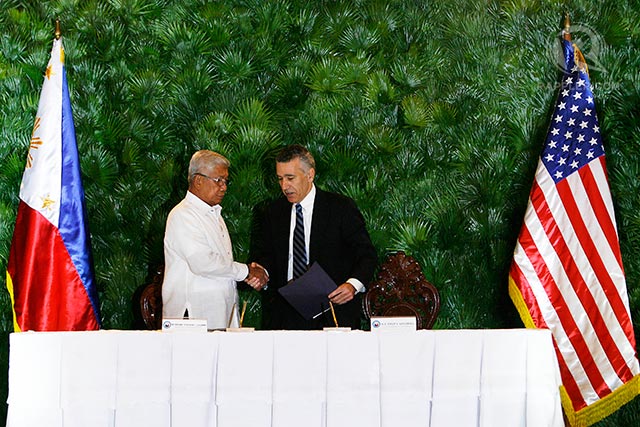 MANILA, Philippines – US Ambassador Philip Goldberg pushed for the implementation of the Enhanced Defense Cooperation Agreement (EDCA) on Tuesday, April 28 – exactly a year since the military-to-military agreement was signed shortly before the visit of US President Barack Obama to the Philippines.

“We are hopeful it will go into effect. It’s an important step in our bilateral relationship. We believe it suits the interests of both countries,” Goldberg told reporters at the inauguration of the National Coast Watch Center, a maritime law enforcement facility that received assistance from the US government.

“But we are respectful of the Supreme Court and we’ll wait to see what the decision is and how it moves forward,” Goldberg added.

EDCA allows the US military to build its own facilities and preposition its defense assets inside assigned Philippine military bases. (READ: EDCA: Palawan air base added to locations offered to US)

The agreement is still pending before the Supreme Court (SC), which is currently on a decision-writing recess.

Asked if EDCA is one of the decisions the High Court is working on, SC spokesperson Theodore Te said: “We will know in June.”

While the Department of Foreign Affairs (DFA) and the Department of National Defense (DND) have always argued for its urgency, the High Court took its time. It held oral arguments in November 2014, or 6 months since the petitions were filed.

Another 5 months later, there is still no ruling.

EDCA was negotiated against a backdrop of a growingly aggressive China – in the aftermath of the Chinese 2012 occupation of Scarborough (Panatag) Shoal off the coast of Zambales province.

The US has repeatedly said it is not taking sides in the maritime dispute but it supports the Philippine move to settle it amicably through international arbitration. The US has also been helping the Philippines improve its capability to perform maritime security operations.

“We’re very hopeful and we want to move forward in our defense and security relationship because it’s important for the general environment and economic prosperity of the region,” Goldberg added.

The Philippine request for US assistance coincides with the US strategy to rebalance to the Asia Pacific region. The US made a gentle push for EDCA during the visit of David Shear, US Defense Assistant Secretary for East Asia and Pacific, for the Bilateral Strategic Dialogue held in Manila last January.

As soon as EDCA was signed, critics brought it to the High Court on the ground that it is de facto basing, and thus cannot be a mere executive agreement as it is, but should be a treaty ratified by the Senate.

Critics argued it will also lead to environmental degradation.

There is no TRO against EDCA but defense officials opted to wait for the ruling to avoid a situation where they would have to demolish facilities the US has built – in the event of a negative ruling.

EDCA also turned into an emotional issue in October 2014 because of the custody battle over a US Marine suspected of killing Filipino transgender Jennifer Laude. The US initially refused to surrender Lance Corporal Joseph Scott Pemberton in spite of requests from the Philippine government.

It was on the same month that the Armed Forces of the Philippines and the US Pacific Command agreed on 8 Philippine military bases that would be tapped for EDCA. The list was revealed to ABS-CBN last week.

Philippine security observers argue that US troops are already doing the activities that EDCA wants to allow – sometimes discreetly. But a source in the Department of Foreign Affairs said the US military needs EDCA signed to justify a bigger funding request for military activities in the Philippines.

“They can only ask for so much if the justification is military exercises,” the source said.

Where is US commitment in West PH Sea?

EDCA was signed by Philippine Defense Secretary Voltaire Gazmin and US ambassador to the Philippines Philip Goldberg.

Senator Miriam Santiago is one of those who have been vocal in attacking EDCA as unconstitutional, upholding the powers of the Senate to forge basing agreements. She filed a resolution last year seeking the sense of the Senate on the issue, but her colleagues took no action.

In oral arguments before the Supreme Court, the government maintained it is not basing per se because the US troops are limited inside Philippine military bases and Filipino officers will supposedly have ultimate control of the facilities.

But the oral arguments were not limited to legal issues. The magistrates expressed concern over the country’s capacity to defend its maritime territory. (VLOG: SC ends oral arguments on EDCA)

The magistrates debated at length if the Americans are actually going to help the Philippines against China.

In oral arguments held in November 2014, however, the government lawyer admitted there is no guarantee the US will come to the Philippines’ defense against China.

While there’s no guarantee that US presence would have stopped China from reclaiming the reefs, a retired high-ranking military officer argued it could not have done it in the pace it has taken.

“Maghihinay-hinay yan kung nandito ang mga Amerikano (They would be more careful if the Americans were here),” the retired officer said.