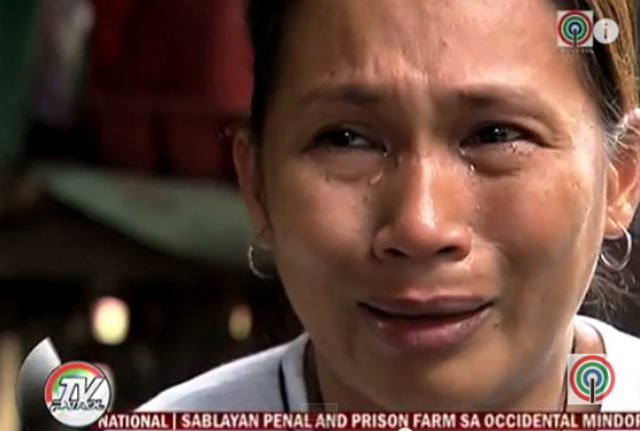 De Guzman said Sergio, a resident of Talavera in Nueva Ecija, was there to “seek assistance for reason that she has been receiving death threats.”

“She voluntarily appeared to this office for security reasons,” she said.

The National Bureau of Investigation had earlier filed illegal recruitment, human trafficking, and estafa charges against Sergio and two others in connection with Veloso’s case. (READ: African, two others accused of trafficking Mary Jane)

Indonesia has sentenced 30-year-old Veloso to death because of drug smuggling. Veloso’s camp, however, argues that Sergio duped her into unknowingly smuggling 2.6 kilograms of heroin into Indonesia. (READ: The story of Mary Jane Veloso, in her own words)

Indonesian Cabinet Secretary Andi Widjajanto told reporters that the Indonesian government has been notified that Veloso’s alleged recruiter has surrendered.

“We were informed by Migrant Care about the news that there may be new evidence as the recruiter has surrendered. But of course, we have to confirm it first,” he said.

Could it save Veloso?

“Depending on the results of our confirmation and the implications of it on the legal process,” he said.

Reacting to Sergio’s surrender, lawyer Edre Olalia, secretary general of the National Union of People’s Lawyers (NUPL) said:  “That’s the only moral thing to do. It might be the 11th hour but at least we have something to work on and for the president of Indonesia to take into serious account.”

Olalia said that “the least that she (Sergio) can do is to declare categorically that Mary Jane is innocent.”

He added, “If President Widodo still stands by his position, it will put to rest any remaining doubts about her innocence.”  (READ: Jokowi on Mary Jane: It’s about the supremacy of law)

Veloso is due to be executed anytime after 5 pm on Tuesday, April 28.

It remains to be seen whether Sergio – who had earlier denied the allegations against her and had said that the “truth” would come out regarding her involvement – would own up to the charges against her.

Preliminary investigation on May 8

The  Philippine Department of Justice (DOJ) has summoned Sergio, her partner Julius Lacanilao, and a certain “Ike” of African descent to appear before Assistant Prosecutor Susan Alarcon on May 8 for the preliminary investigation on the case.

Justice Secretary Leila de Lima told reporters on Tuesday that she has assigned Alarcon, a member of the DOJ Task Force on Anti-Trafficking-in-Persons, to handle the criminal cases of the 3.

De Lima also said the National Bureau of Investigation (NBI) is coordinating with its Malaysian counterparts to determine the identity of “Ike,” who met with Veloso and her recruiter in Malaysia.

“The NBI is coordinating with their counterparts in Malaysia to determine the identity and place of nationality of that alleged alias ‘Ike.’ That’s really part of the investigation now,” she said.

In her affidavit, Veloso said “Ike” met her and Sergio in Malaysia in 2010, before Sergio sent her to Indonesia. She said it was “Ike” who gave her the empty luggage, later found with heroin, and was told to use for her Indonesian trip. She was given an “errand” before she could get the job as a domestic helper in Malaysia.

De Lima met that day with Philippine Drug Enforcement Agency (PDEA) officials to discuss the case of Veloso. The PDEA had endorsed to the NBI its finding that Veloso was a victim, not a drug trafficker.

The NBI’s charges against Sergio, Lacanilao, and “Ike” were based on Veloso’s affidavit and the PDEA findings. – with reports from Jet Damazo-Santos/Rappler.com