Marcos aims to finish BBL hearings by May 25 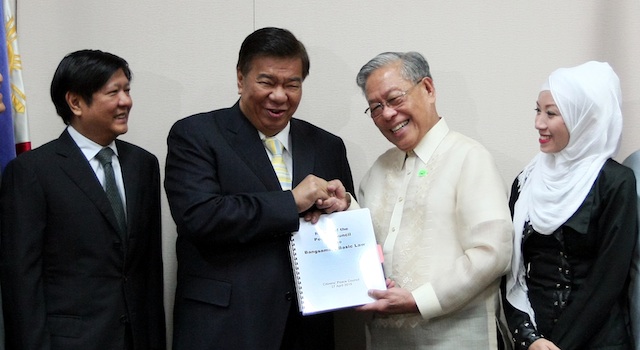 MANILA, Philippines – Will the Senate beat the June target to pass the proposed Bangsamoro Basic Law?

Senator Ferdinand Marcos Jr on Tuesday, May 5, said the Senate committee on local government is set to wrap up discussions on the proposed law in two weeks or by May 25.

If Marcos’ timeline is followed, the Senate only has 3 weeks to produce a committee report on the measure, conduct plenary debates, and put the measure to a vote.

Senate President Franklin Drilon on Tuesday, May 5, did not provide a clear commitment to finish BBL deliberations before Congress adjourns the second regular session on June 11.

“Once we receive the report of the Committee, we will immediately commence debates and vote upon it at the soonest,” Drilon said.

On Tuesday, the Malacañang-convened Citizens’ Peace Council formally submitted its report on the proposed BBL to the Senate.

Marcos said there are at least 4 other hearings lined up for his committee  including hearings in Zamboanga and Jolo tentatively scheduled on May 12 and May 13.

The committee will also hear the sides of the traditional sultanates in Sulu and indigenous peoples in another round of hearings in Manila.

The House of Representatives, meanwhile, is already set to put the bill to a section-by-section vote on May 11.

Passing the BBL by June is a crucial deadline for its already delayed passage as the country gears up for the 2016 elections.

The proposed law – a product of the peace deal between the government and rebel group Moro Islamic Liberation Front – was expected to be put to a vote by March 2015.

However, delays in the submission of the draft bill to Congress back in 2014 and the fallout from the Mamasapano clash further pushed back the deadline.

The Office of the Presidential Adviser on the Peace Process earlier said it hopes to conduct the plebiscite to ratify the BBL before the filing of the certificates of candidacies (COCs) in October so that prospective candidates for the Bangsamoro government in 2016 may also file their COCs that month.

The June deadline also factors in the possibility that the BBL could be questioned before the Supreme Court once it passes Congress as it faces constitutionality issues.

Conducting the plebiscite by October gives an MILF-led body at least 6 months to lead the transition towards the Bangsamoro.

Marcos welcomed the recommendations provided by the Peace Council on Tuesday to improve the bill, saying that they encourage the Senate to continue deliberating it.

The Peace Council, led by former Chief Justice Hilario Davide, earlier said the bill was constitutional and “overwhelmingly acceptable” to the general public, save for changes to some provisions.

The House and the Senate are set to delete provisions in the bill which they deem as unconstitutional and destabilizing. (READ: House, Senate panel chairs differ on key BBL provisions)

Without changes, Marcos said the BBL has no chance in passing either chambers of Congress.

“I can categorically state that the draft BBL as transmitted to the Senate in its form would not pass either House,” Marcos said. – Rappler.com