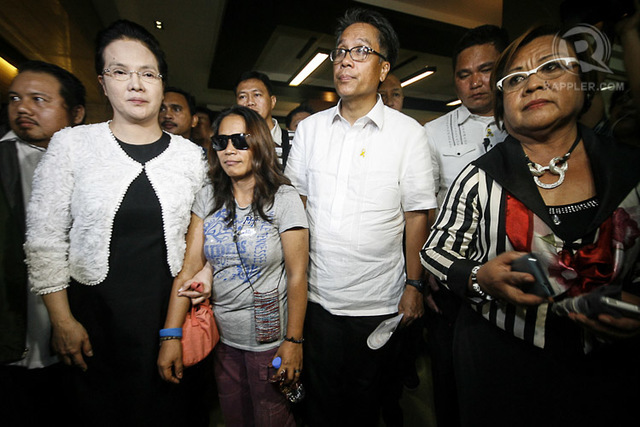 MANILA, Philippines (2nd UPDATE) – The alleged recruiters of Filipino-on-death-row Mary Jane Veloso are set to face a criminal case of illegal recruitment before a Nueva Ecija court and will remain in detention.

The Department of Justice (DOJ) resolved on Thursday, May 7, that there is probable cause to indict Maria Cristina Sergio and Julius Lacanilao on the charge of illegal recruitment, but has yet to approve the filing in court of charges related to human trafficking and estafa.

The illegal recruitment case will be filed on Friday, May 8. It stems from the complaints of 3 victims who surfaced other than Veloso. No bail was recommended for Sergio and Lacanilao.

It is deemed “committed in large scale if committed against 3 or more persons individually or as a group,” the law reads.

The complaints against Sergio and Lacanilao came after extensive media coverage on and public attention to Veloso’s case.

No need for actual deployment

The qualified illegal recruitment case against Sergio and Lacanilao are based on complaints of 3 women in Talavera who alleged that Sergio had offered them jobs abroad at different dates from 2010 to 2014.

None of them accepted the job offers, having known that Sergio was the one who had recruited Veloso.

The DOJ resolved  that “the law does not mandate that the victim of illegal recruitment should actually be deployed abroad in order for the crime to be completed.”

Veloso’s arrest in 2010 had become talk of the town, allowing other victims like the 3 involved in the impending illegal recruitment case to either reject or back out from Sergio’s offers.

Upon knowing about her arrest in 2010, Veloso’s parents confronted Sergio about it in Talavera.

Sergio had told the Veloso couple at that time not to worry as she was part of a well-connected international drug syndicate, which can easily secure Veloso’s freedom. (READ: Mary Jane Veloso a drug smuggler? Look at our home, parents say)

The Philippine Overseas Employment Administration (POEA) warns against illegal recruiters, stressing the links of the underground industry with drug syndicates.

Overseas employment has been a bait by which syndicates prey on many unsuspecting Filipinos, but the dangers that await illegal employment-related migration are overwhelming and at most times irreparable. (READ: How to report suspected cases of human trafficking)

The Philippines is a known labor-sending country, with over 10.5 million Filipinos either temporarily working or permanently residing abroad.

While remittances of Filipino migrant workers boost the economy, President Benigno Aquino III envisions a government that generates jobs at home so that working abroad will be a choice rathe than a necessity. – Rappler.com