Sergio’s counsel denies she admitted being part of drug trade 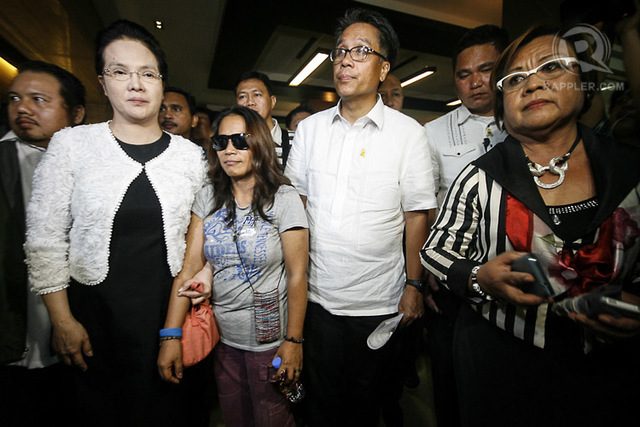 In a phone interview on Thursday, May 7, Acosta slammed the Department of Justice (DOJ) for citing hearsay information in its resolution detailing a supposed confession by Veloso’s alleged trafficker and illegal recruiter Maria Cristina Sergio.

Acosta challenged the DOJ to come up with a document Sergio signed attesting to the confession the department claimed.

She regarded as “unfair” and “trial by publicity” the DOJ’s move to disclose details of a supposed admission by Sergio.

“I asked the panel of special PAO attorneys na (who are) assigned sa kanila (to them). Attorney Howard Areza said there is no confession,” Acosta stressed.

Acosta said the confession bared by the DOJ is “null and void.” Its self-incriminating nature, especially without the benefit of legal advice from counsel, would make it “unconstitutional,” she said.

The circumstances surrounding the alleged admission was vaguely indicated in the DOJ resolution.

In its 18-page resolution released also on Thursday, the DOJ said “the NBI-AHTRAD (National Bureau of Investigation Anti-Human Trafficking Division), through the PNP (Philippine National Police), was able to gather information from both respondents themselves, relating to their complicity.”

“Particularly, respondent Sergio narrated that the drug operations conducted by the international drug syndicate that she is connected with operated within and outside the Philippines, as she had several co-conspirators in Manila, Hongkong, and Malaysia,” the resolution read.

Acosta said PAO will challenge the continued detention of Sergio, who did not have a standing warrant at the time of her arrest.

The DOJ had resolved that the arrest was legal following the inquest proceedings and “a painstaking evaluation of the evidence at hand.”

In a text message even prior to the release of the DOJ resolution, Acosta had said that “Sergio says she is not [a drug mule.]”

A high school drop-out and a mother of two, she insists she was framed and duped into unknowingly serving as a drug mule. (WATCH: The fate of Mary Jane Veloso) – Rappler.com