Grand welcome for Ampatuan son out on bail 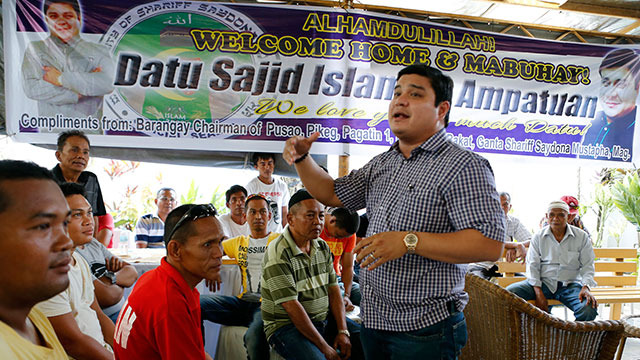 COTABATO CITY, Philippines – After 5 years in an overcrowded prison facility in Manila, Sajid Islam Ampatuan, one of the suspects in the 2009 Maguindanao massacre, returned home to a hero’s welcome organized by his supporters.

Family members, supporters, and local officials greeted Sajid, the youngest son of former Maguindanao governor Andal Ampatuan Sr., when he arrived at the gathering, after staying at a local Muslim politician’s home.

Sajid was granted bail on January this year by Regional Trial Court Branch 221 Judge Jocelyn Solis-Reyes. The court allowed the temporary release of Sajid after he posted a surety bond of P11.6 million for the 58 cases against him.

Sajid is the first of the major suspects in the 2009 Maguindanao massacre to be granted temporary release. The November 23, 2009 event saw 58 people – including 32 media practitioners – killed in Ampatuan town. Sajid has maintained that his conscience is clean.

“It’s mixed emotions. I’m happy now, but I’m sad because my dad and siblings are still in prison. But because of the love and support of the people who welcomed me, I feel loved,” he told reporters.

“Life inside the jail was so difficult. It’s hot in there, and crowded inside. But because of the help of Allah, I managed to survive,” Ampatuan said.

His wife, children, mother and relatives were his source of strength while locked up in prison, he said.

The youngest among Andal Sr’s children said the door is open for reconciliation with the Mangudadatu clan – the prime target of the deadly massacre.

“I am saddened because you know it’s not easy to have your loved ones gone forever. However, it’s also disappointing to pay for something and you will be jail for a crime you have not committed. It’s painful for me to see my wife and kids growing while I’m not with them,” he said. 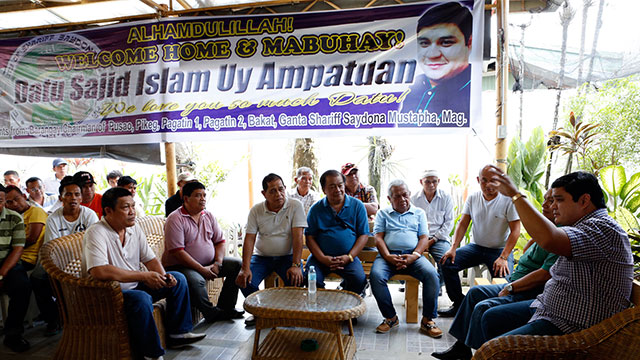 Ampatuan recalled that before he left jail, his father and his eldest brother both advised him to take care of himself and look after their clan and constituents.

“If the people and my relatives wanted to me run for office next year, I will give in to their call,” he said.

When asked for his message for his dad and siblings, Ampatuan said he wanted them to be strong and courageous. “There is a saying, if you can bear with the difficulties in life, Allah is with you,” he said.

He thanked President Benigno Aquino III for being fair, and said Aquino did not use his power to influence the case.

For the general public that is still angry to them, he is hoping that they will respect the law.

“It’s not only me who was allowed to post bail. There were 42 police who were also allowed by the court [to post bail] before,” he said.

In total, around 60 suspects, including members of the Ampatuan clan, have asked the court to allow them to post bail. – Rappler.com