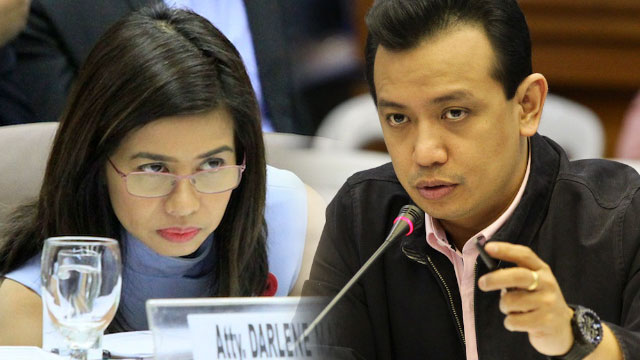 MANILA, Philippines – Is Vice President Jejomar Binay using his position as housing czar to hand out development loans to his allies and friends?

Trillanes delivered a presentation showing that Binay political allies and friends got P134 million ($3 million) in development loans from Pag-IBIG Fund since Binay became chairman of the agency in 2010.

Trillanes told Berberabe: “Ang paggamit, pag-abuse ng power and authority ay dapat tindigan ninyo. (You should stand up against the use and abuse of power and authority.) But you are instrument of that abuse…. That’s really the worst, Attorney Berberabe!”

Berberabe was defiant but kept her cool. She tried to explain that there was no irregularity in the loans.

Trillanes said the loans smacked of conflict of interest, and showed Binay’s “pattern of corruption.”

(He already has a template for corruption. There is corporate layering, dummies he employs but ultimately this goes to his pockets. When the documents on the bank accounts come out, you will find out where this went.)

Yet Berberabe said that Pag-IBIG Fund follows strict parameters in awarding loans like technical feasibility, market feasibility, financial feasibility, and requires the approval of various government agencies like local government units, the environment department, and the Housing and Land Use Regulatory Board (HLURB).

Berberabe said the connections to Binay did not follow the definition of conflict of interest as stated in the Code of Conduct for Public Officials.

Berberabe said that all the development loans were either fully paid or current, and there were no non-performing loans unlike during the Arroyo administration. “If Vice President Binay wants to ensure the loans go to his friends and allies, then he should have maintained the loans of the previous administration.”

The probe into Binay’s alleged deals is the longest in the history of the Senate blue ribbon committee. Trillanes admits the hearings are meant to derail the presidential bid of the Vice President, the 2016 front runner. The inquiry also supported the Ombudsman’s investigation into plunder and graft complaints against the Binays.

The senator said that Lockton officers Raoul Angangco, Maria Concepcion Simundac, and Leo Bernard Samaco are partners and associates in the Villaraza and Angangco Law firm, which he identified as pro-Binay.

“We did extraordinary due diligence. We consulted the Governance Commission for GOCCs, which has oversight over us, the Department of Finance, and the Insurance Commission, and they said this is the way to go. This is proof that Pag-IBIG Fund is serious about good governance at the treat of litigation,” she said.

Berberabe took exception to Trillanes’ attacks on her and Pag-IBIG Fund. She said that as an honest public official, she was indignant about protecting her name. Berberabe is a multi-awarded lawyer who was hesitant to join government.

(I am from the private sector. I am not desperate to join government service. I graduated. I know how to look. I know how to clean a house. I won’t lose a job after this.)

(I just want to say that I will not be forced by anyone to sign a contract that I think is wrong just to secure a government position!)

Trillanes also again brought up the syndicated estafa case Pag-IBIG Fund initiated against businessman Delfin Lee of Globe Asiatique (GA), along with homeowners who claimed to be defrauded of their hard-earned money.

The senator maintained Binay was just getting back at Lee because the developer supposedly refused to agree to the request to dole out campaign funds in 2010.

“Hinalughog natin ang mga OFW. Ni walang isang nagreklamo na nagbayad ng pambili ng bahay tapos tinakbuhan na walang bahay,” Trillanes said. (We looked for the OFWs. Not even one complainant surfaced to say he or she had no house.)

This time, it was the victims of the GA housing scam who lamented Trillanes’ statement.

After the hearing, a tearful complainant, Evelyn Niebres, showed up at the Senate and said her group was disappointed. Niebres said she paid P1.5 million ($30,000) for a house in Mabalacat, Pampanga, only to find out that the title is in the name of another person. (READ and watch: GA Homeowners: Lee must suffer like we do)

(We are shaking in anger because it’s like we are invisble. We are here and we are the victims they are looking for. It seems they want Delfin Lee to be famous even if he fooled many people.) – Rappler.com