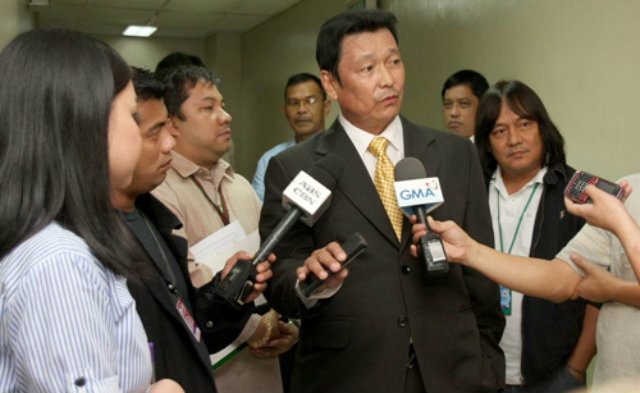 Facebook Twitter Copy URL
Copied
Admitting that he won as senator on 'pure luck,' Senator Lito Lapid says he will run for mayor of Angeles City in Pampanga as he is more suited for that work

MANILA, Philippines – “Hindi naman ako bagay dito. Tsamba-tsamba lang sa Panginoon at sa tulong ng aking mga kababayan (I am not suited here. It was pure luck, thanks to the Lord, and the help of our compatriots).”

Senator Lito Lapid, best known for his filmography than legislative work, announced that he will run for mayor of Angeles City in Pampanga in the 2016 polls.

The action-star-turned-lawmaker is a man of a few words in the Senate but granted reporters a rare interview on Tuesday, May 12, to reveal his political plans, and to look back at his career as a two-term senator.

(It’s fun. I am always nervous. As you know, I lack education. They might ask me something, and I cannot answer. I just keep working. If there is a good bill, I support it. I learned a lot.)

Lapid did not earn a college degree because he pursued acting, but gained mass popularity for playing roles like Leon Guerrero, the Filipino “Lone Ranger” who fights evil.

A former governor and vice governor of Pampanga, Lapid said he will go back to his home province, and make a bid for city mayor. Lapid’s media staff, Alex Marcelino, told Rappler that a possible running mate of the senator is Willie Rivera, lawyer of detained property developer Delfin Lee.

His son, Mark, will run for the Senate. Mark Lapid is the chief operating officer of Tourism Infrastructure and Enterprise Zone Authority (TIEZA), the agency supervising tourism enterprise zones. He was also governor of Pampanga.

Still, Lapid said his son is willing to be adopted by other parties like the ruling Liberal Party (LP) of President Benigno Aquino III. “Kung kukunin siya, open kami (If they will get him, we are open).”

The politician said there is no offer yet from the party of Vice President Jejomar Binay, the opposition United Nationalist Alliance (UNA).

Lapid said he will support Senator Grace Poe, whether she runs for president or vice president. Poe is the daughter of a fellow action star, the late Fernando Poe Jr.

“Siyempre, Fernando Poe iyan e. Malaki utang na loob namin diyan. Kahit saan siya, susuportahan namin siya (Of course, that’s Fernando Poe. We have huge debt of gratitude to him. Whatever post or party she runs with, we will support her),” Lapid said.

Lapid returns to Pampanga after facing a plunder case, along with Mark and other former officials back in 2009. Then Pampanga governor Fr Eddie Panlilio accused them of failing to remit quarrying fees amounting to more than P500 million ($11.15 million) during their terms as governors, but then Ombudsman Merceditas Gutierrez cleared them.

Lapid was also linked to the fertilizer fund scam during the Arroyo administration, and the pork barrel scam.

In the Senate, Lapid has been among the most prolific senators. In 2014, he filed 219 bills, the 4th highest next to Senators Miriam Defensor Santiago, Jinggoy Estrada, and Antonio Trillanes IV.

Some of his bills piqued media interest like the one banning the “overloading” of school bags: “An act limiting the amount of weight of bags carried by children in school and implementing proactive measures to protect schoolchildren’s health from the adverse effect of heavy school bag (sic).”

Yet he was absent during the voting on the contentious Reproductive Health (RH) law.

During debates on the measure, he related the difficulty of Senate work.

“These senators are also lawyers who spent 10 years in law school while I spent 10 years practicing my stunts….Much as I want to interpellate, my tongue is not used to English.”

He added, “Wala akong magagawa kung ipinanganak ako nang mahirap; anak ng labandera eh. Hindi ako nakapag-aral dahil sa kahirapan (There’s nothing I can do because I was born poor, the son of a laundrywoman. I wasn’t able to go to school because of poverty). – Rappler.com