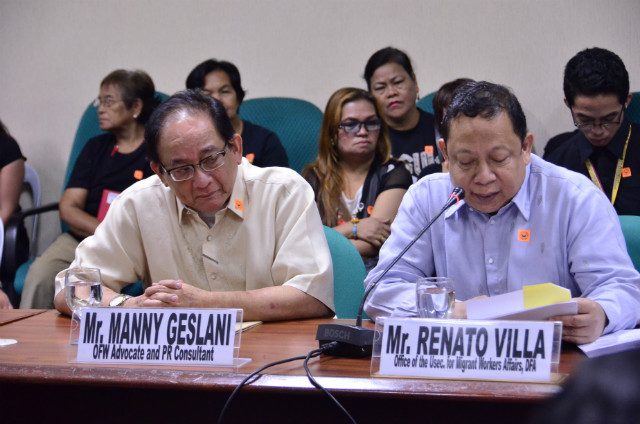 MANILA, Philippines – Lack of direct communication lines, lack of information on the right people and entities to contact, and proneness to abuse of female migrant household service workers (HSWs) are among the challenges the Department of Foreign Affairs (DFA) pointed out in its work safeguarding their rights.

In his remarks during the first day of the Red Cross and Red Crescent Manila Conference on Migration on Tuesday, May 12, Renato Villa of the DFA Office of the Undersecretary for Migrant Workers’ Affairs explained the dire situations many Filipino HSWs find themselves in.

“You may have heard of domestic workers branded with a hot iron or scalded with hot water or beaten to the point of fainting and losing consciousness,” he said.

While acknowledging that “kind, and even caring employers, outnumber those who subject our nationals to maltreatment,” he outlined 3 challenges the department faces when handling cases of Filipino female migrant HSWs.

“After a domestic worker is deployed, the next of kin and the embassy seldom have access or communication with the worker. Foreign cultures and laws, particularly in the Middle East, have strict privacy practices and provisions,” explained Villa.

“Usually, an embassy official has to go through the police authorities before being allowed to talk with or meet the Filipino,much less rescue her from the clutches of an abusive employer,” he added.

Research by the University of Southern California released last February 25 highlighted the importance of “social media platforms designed to increase connection and reduce isolation for migrant laborers and vulnerable populations.”

Using the Philippines as case study, the study said technology-based networking services to overseas Filipino workers (OFWs) must be developed “so they can connect with their support networks while abroad.”

Stakeholders attested “that Facebook in particular provides a powerful means for their beneficiaries to expand their social network and has become an important mechanism for reporting abuses.”

This supports a recent move by the Philippine Overseas Employment Agency (POEA) requiring licensed recruiters to create their own Facebook pages as a “communication platform for deployed household service workers.”

Villa also cited a recent case of a Filipino domestic worker in Bahrain who was raped by the son of her employer and was able to escape by “conveying her situation” through Facebook.

“The embassy, with the help of the police, rescued her and had the perpetrator arrested,” Villa said.

Villa said the “lack of information on the part of the worker” is also a barrier in the accurate reporting of cases of abuse among Filipino HSWs overseas.

“If she gets into trouble with the employer, the worker may be unable to ask for help from her foreign recruitment agency or embassy/consulate/POLO (Philippine Overseas Labor Office), as she may have misplaced the contact details of her agency or the embassy,” he said.

He stressed that an OFW must be advised during the pre-departure orientation seminar (PDOS) to keep in a secure place the contact information of entities he or she would need to contact in case faced with unfortunate incidents as a worker abroad. The migrant worker must also be reminded during the PDOS to keep multiple copies of the listed emergency contacts, added Villa.

The PDOS is a requirement for departing Filipino migrant workers, a seminar meant to empower them with basic information they’ll need in their employment-related migration.

Villa said Filipino women domestic workers go to extreme lengths to “fend off the advances of the male household members.”

“She should always keep her bedroom locked at all times. Some Filipinas, sensing the lascivious intention of a male member of the family, wear 2 to 3 layers of shorts or underwear,” said Villa.

“Some adopt an extreme precautionary measure. They do not take a bath or take a bath only once a week. Or they make sure the male employer is not around to see her after she took a bath,” he added.

Even after a worker escapes from an abusive employer, Villa said the barriers to safeguarding their rights remain.

“The employer, more often than not, would file countercharges, the least of which is absconding,” he said.

Provisions under the United Arab Emirates Federal Law 6 of 1973 on the Entry and Residence of Foreigners prohibit domestic workers from “absconding” or leaving their sponsor without consent and ahead of the end of their contract. (READ: Mega-recruiters in Gulf states answer to Kafala?)

Absconding under UAE law is an administrative offense punishable by deportation, penalties, and a one-year entry ban into the federal nation.

The UAE’s revised domestic labor contract also makes “null and void” the rights of a worker who absconds.

Theft and perjury are among other cases employers lodge against domestic workers who accused them of abuse, Villa said, citing actual cases without naming the victims.

“In another case, a Filipina who was raped was accused of provoking her rapist and making sexual advances,” he said.

Postponements occur, as an accused employer in the Middle East is “often given 3 to 5 chances to appear in court before he is summoned by the police.”

“In the meantime, the distressed worker gets restless, becomes irritable, and asks instead for an amicable settlement so she can go home earlier,” he explained.

Still, Villa said, “the presence of [Filipino] domestic workers in households all over the world could be considered a liberating force.”

“It allowed wives to work or engage in in other productive activities. We should also consider the pervasive cultural and long-lasting influence of domestic workers on their young wards,” he added.

The Philippines is a known labor-sending country. Over 10 million Filipinos are either temporarily working or permanently residing abroad, according to the 2013 Commission on Filipinos Overseas (CFO) Compendium of Statistics. More recent estimates peg the number at 15 million.