MNLF, sultans want out of Bangsamoro This was the recurring sentiment of representatives of the Moro National Liberation Front (MNLF) and the sultanate of Sulu during the Senate hearing on the proposed Bangsamoro Basic Law (BBL) in Jolo, Sulu, Wednesday, May 13.

Before an audience that included Sulu Governor Abdusakur Tan II, his father, Sulu Vice Governor Abdusakur Tan, and mayors of Sulu towns, both the MNLF and representatives of the Sulu sultanate turned the hearing into an opportunity to reiterate their staunch opposition to the proposed law.

Both groups said they felt excluded from the BBL, despite earlier assurances from peace negotiators that the law is inclusive.

The MNLF, in fact, warned that the provinces of Sulu, Tawi-Tawi and Basilan – three of the 5 provinces under the current Autonomous Region in Muslim Mindanao – would vote against the BBL during the plebiscite.

The representatives of both groups told Senator Ferdinand “Bongbong” Marcos Jr, who’s leading Senate consultations on the BBL,  that they were never consulted during the crafting of the proposed law – grievances that were raised even during the peace talks between the government and the MNLF, resulting in two separate bloody clashes: the March 2013 Sabah standoff and the September 2013 Zamboanga siege.

Members of 2 out of 3 MNLF factions attended the hearing – the faction led by former Cotabato City vice mayor Muslimin Sema and the MNLF-Islamic Command Council. Both factions oppose the BBL. The faction led by MNLF founding chairman Nur Misuari attended an earlier forum on the BBL held in Jolo on Tuesday but skipped the Senate hearing.

The Sulu sultanate was represented by Datu Albi Julkairnan, chairman of the Council of Datus, and Abraham Idjirani, spokesperson of a branch of the Kiram family claiming to be the heirs to the sultanate.

The BBL seeks to create an autonomous region that is parliamentary in form, with district, sectoral and reserved seats. The set-up is designed to encourage groups like the MNLF to create their own parties or field their own candidates to run for office. The MNLF signed two peace agreements with the government. The first one – the 1976 Tripoli Agreement – was signed during the administration of Marcos’ father, former dictator Ferdinand Marcos.

The next peace deal was signed in 1996 during the Ramos administration. Months after signing the agreement, Misuari was elected governor of ARMM.

However, the MNLF maintains that the government has yet to fully implement both peace agreements.

“They tried to smuggle the provisions of Republic Act 9054 and the 42 consensus points to the (Comprehensive Agreement on the Bangsamoro). That is intellectual piracy. They have no courtesy,” said Abdul Sahrin, secretary general of the MNLF-Sema faction.

MNLF-ICC chairman Habib Mudjahab Hashim said both groups “agreed to disagree” during the meeting with the OIC in April. 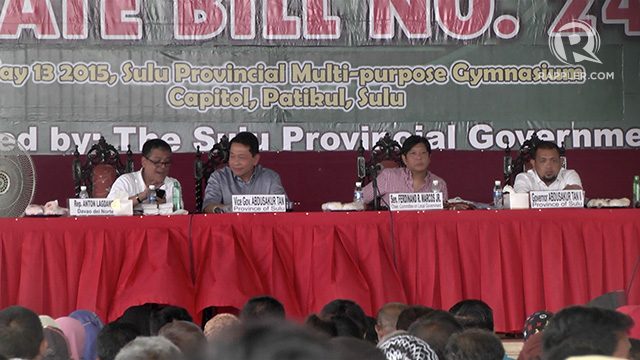 Another layer of conflict, which involves cultural issues unique to Muslim Mindanao, surfaced during the hearing.

If the MNLF would have it their way, they would rather return to the set-up that was established in the region following the signing of the Tripoli Agreement, where there were two regional autonomous governments in Western and Central Mindanao.

This is because the Tausugs, who are traditionally known to be warriors, do not want to be governed by the Maguindanaoans, Sahrin said.

“We don’t like the Maguindanaoans to govern us. There must be two [autonomous regions], a federal system of governance. There must be one federated state – one for the sultanate of Sulu territories and another for central Mindanao,” Sahrin said.

But even Marcos, in a press conference in Zamboanga after the Jolo hearing, said this is no longer possible at present. The conflict in Mindanao started in the 1970s during the regime of his father. More than 4 decades since, peace in Mindanao remains elusive.

Although Marcos acknowledged that the MNLF’s position is valid, he said he believes MNLF’s grievances could be addressed by assuring them that they would be involved in the future Bangsamoro government.

The Sulu sultanate, meanwhile, wants areas under the traditional jurisdiction of the monarchy, which includes the provinces of Sulu, Tawi-Tawi and Basilan, to be excluded from the Bangsamoro.

They also raised an issue against the provision appointing a Wali or a titular head of the Bangsamoro autonomous government since they still recognize the traditional sultans.

Marcos will hold separate set of hearings with the MNLF and the Sulu Sultanate in Manila on May 18 and May 25.

Asked if the Senate can still beat the target deadline to pass the law before Congress adjourns on June 11, Marcos admitted that doing so would be “tough.”

Marcos is also set to hold another public hearing in Zamboanga on Thursday, May 14. – Rappler.com