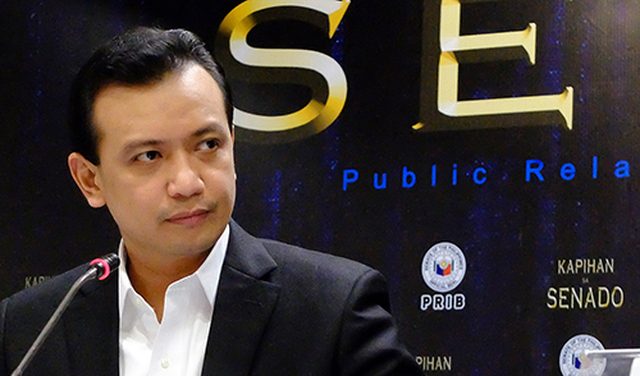 MANILA, Philippines (UPDATED) – The Court of Appeals (CA) has ordered Senator Antonio Trillanes IV to explain why he should not be cited for contempt after alleging that two CA justices accepted bribes to issue resolutions favoring Makati Mayor Jejomar Erwin Binay Jr.

In a two-page resolution, the appellate court’s 11th division gave the senator 10 days to comment on the contempt charge filed against him by the Makati mayor.

The CA also gave the Binay camp 5 days to submit a reply.

On April 16, Binay filed a petition for contempt against Trillanes for alleging that Binays paid off 2 justices to issue a temporary restraining order (TRO) and a writ of preliminary injunction stopping the Ombudsman’s suspension order against the Makati mayor.

Citing “reliable sources privy to the matter,” Trillanes claimed that CA Justices Jose Reyes Jr and Francisco Acosta of the 6th Division got a total of P50 million ($1.12 million) to issue the resolutions.

In his petition for contempt, Binay said Trillanes’ “malicious and baseless” allegations attacking the credibility of the court and its justices constitute indirect contempt of court.

Trillanes’ claims stem from the appellate court’s rulings stopping the 6-month preventive suspension order issued by the Ombudsman against Binay over the alleged overpricing of a Makati City Hall parking building.

The CA earlier issued a 60-day TRO stopping Binay’s suspension on the same day the order was served.

The court later granted Binay’s plea for a writ of preliminary injunction stopping the suspension indefinitely.

Trillanes said his lawyers are preparing his legal response to the CA resolution on the contempt charge.

“I’m confident that it would not prosper because it would be absurd for a lower court to cite a legislator [in] contempt for performing his oversight function of exposing or calling to investigate an alleged bribery/corruption committed by a public official based on credible information,” the senator said.

Meanwhile, the appellate court’s ethics committee is investigating the bribery allegations against the two CA justices.

Under the internal rules of the CA, the ethics committee handles matters involving discipline of its judicial officers, including investigations on complaints against court personnel.

Castillo, however, has inhibited herself from the case because Mayor Binay’s mother, Elenita Binay, was a wedding sponsor of her child.

Others who inhibited from the case include justices Jane Lantion and Acosta, subject of the probe.

The committee’s findings will be submitted to Reyes for approval before being given to the Supreme Court en banc for the final decision. – Rappler.com