May 21, 2015 3:49 PM PHT
Biel Pante
Facebook Twitter Copy URL
Copied
The Kentex factory has been described as a 'death trap' when it is merely symbolic of our economic system – the real death trap Year after year, we begin the month of May with a celebration. Mayo Uno, the first of May, is meant to commemorate and celebrate the triumph of the Filipino working class. The annual commemoration serves as a reminder of the important contributions of Filipino workers to national development. It is a platform for uniting workers in securing decent working conditions, and for raising awareness on important political and socio-economic issues.

But in 2015 — the year when the Philippines is heralded as one of the world’s fastest growing economy — a tragedy happened.

On May 13, over 70 Filipino workers died in the Kentex factory fire in Valenzuela.

Kentex, which manufactures slippers, has over 150 regular and contractual employees who work at any given time. During pakyawan or peak seasons, more workers earn a living at Kentex.

There were more female workers employed in Kentex. One of them was Beth Balico, a 46-year-old mother of 4 who worked in Kentex for over 10 years. Another one was Marietta Madiclom, who, together with her daughter Joanna, was employed through a “handler” in Kentex for years without a clear job description and contract.

Last week, these women died with about 70 others.

Tragedy before the fire 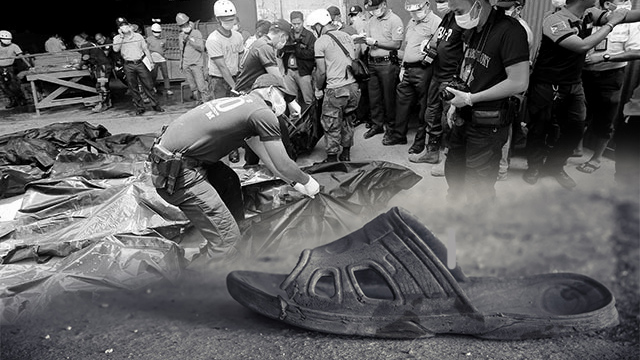 The fire, without a doubt, was tragic. But this tragedy, we must remember, did not begin with the fire—a so-called “accident.” The situation of the Kentex workers before the fire broke out has been an institutionalized form of tragedy – a ritualization of inhumanity.

Initial investigation revealed that the footwear factory had no fire exits and that the windows where the workers could have escaped were covered with wires. Flammable chemicals used in manufacturing slippers have no proper storage, which, some suggest, may be the reason why an explosion was triggered when the chemicals were ignited by sparks from welding activities to fix the door of the main entrance.

There were media reports saying the workers were unaware of fire safety standards and have not attended fire drills before.

The accident could have been prevented if occupational health and safety standards were met and prioritized. The initial investigaton suggests negligence on the part of the company for failing to comply with the safety standards and to provide a conducive work environment for its employees.

Permit-granting bodies are also accountable for allowing the factory to operate even under such unsafe conditions. The Department of Labor and Employment (DOLE) must also answer why they granted the company a certificate of compliance to occupational safety requirements in 2014.

The fire was just the climax of a tragedy waiting to happen. I would say that this was not an “accident” after all.

More than poor standards on occupational safety, the case of the Kentex workers is a classic case of a sweatshop. The Kentex workers were subcontracted, paid salaries below the P481 minimum wage, and experienced constant job insecurity.

The workers were also regularly exposed to chemicals detrimental to their health but were denied health benefits and pensions.

Emmanuel Madiclom recounted that just like most employees, his wife Beth would often complain of the smell and the heat when she first started working in Kentex. They eventually got used to the environment. Despite 15 years of service, Madiclom claimed that his wife never received legally-prescribed workers’ benefits such as an assured minimum wage, Social Security System and PhilHealth benefits, holiday pay, 13th month pay, medical leave, and other benefits.

The Kentex factory has been described as a “death trap” when it is merely symbolic of our economic system – the real death trap.

Systemic problems such as economic inequality, lack of employment opportunities, and insufficient wages leave more and more Filipinos with no choice but to endure harsh working conditions in factories. Hence, the Kentex fire is not an isolated case. It merely magnified the situation of workers trapped within factories with poor working conditions and within an economic system depriving them of sufficient income to live comfortably or to even survive at all.

The labor organization Kilusang Mayo Uno (KMU) reported similar cases of fire-related deaths in the workplace: On May 9, 2012, 17 workers of Novo Jeans and Shorts in Butuan City died in a fire incident. Meanwhile, 8 workers of Asia Micro Tech in Pasay City died on April 30, 2014. These cases are only among the incidents where workers are victimized by work-related hazards.

My interviews and integration experience with workers in manufacturing industries revealed specific cases of occupational hazards they are exposed to. Some experienced scratches, bruises, burns, and sometimes, loss of limb from doing care-intensive tasks or from operating defective machines.

Some were regularly exposed to heat and chemicals which took a toll on their health. Some did not encounter accidents but were still affected physically and emotionally due to required yet unpaid overtime work. In most cases, the workers report about lack of safety gear and regular equipment safety checks which are supposedly provided by their companies.

Relevant concerns for these workers include lack of medical benefits and in-house medical attention, and the limitations in granting sick leaves.

Ensuring workplace safety is a primary obligation of employers and companies to their workers. Putting people above profits is a simple demand for any decent and civilized society. But as we have observed time and again, a great number of businesses continue to prioritize the acquisition of greater profits more than the protection and development of human resources.

Is it worth foregoing safety drills and trainings, safety gear, and additional health benefits for investments on infrastructure and equipment maintenance just to reach production targets and yield more products to sell? If the labor of workers is the major component in producing goods, why then are their welfare and safety not the major priority?

If the accumulation of massive profits is valued more than the well-being of workers, we shouldn’t be surprised if tragedies which manifest the economic “death trap” will continue to happen. – Rappler.com

Ma. Bernadeth Laurelyn “Biel” Pante was the former Chairperson of UP Praxis—a UP Diliman-based organization which aims to promote the theory and practice of Sociology. She is currently an MA Philippine Studies student in the UP Asian Center.