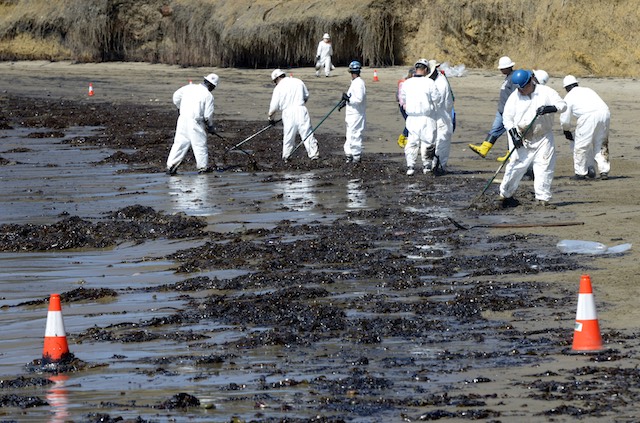 LOS ANGELES, USA – The governor of California declared an emergency as crews scrambled to contain an oil slick and clean up popular beaches after a pipeline rupture dumped thousands of gallons of oil into the ocean.

A day after the spill near Santa Barbara, northwest of Los Angeles, the US Coast Guard said helicopter overflights had shown the slick stretched some 9 miles (14 kilometers) along the Pacific Ocean coast.

The spill caused governor Edmund Brown to declare an emergency in the Santa Barbara area Wednesday, May 20, in order to “quickly” send specialized teams to clean up the hazardous leak.

“We will do everything necessary to protect California’s coastline,” Brown said in a statement alongside the emergency proclamation.

Teams of white-clad workers used rakes, trucks and pads to scoop up thick oil covering the sand on the Refugio Beach, where a campground was evacuated.

A number of government environmental clean-up crews have been mobilized to survey and test the area by aircraft and boat.

The spill was estimated at up to 105,000 gallons (400,000 liters), of which some 21,000 gallons of crude oil may have leaked into the ocean, according to an official update Wednesday afternoon.

Santa Barbara area beaches would normally be preparing to host thousands of visitors for the upcoming Memorial Day weekend, but the affected area was out of bounds.

A nearby beach has been closed for at least a week and a fishing ban has been imposed by authorities one mile east and west of the spill site.

The leak – which began around midday on Tuesday, May 19 – was caused by a Plains All American Pipeline, which stopped the flow of oil, the company said.

It said the oil reached the ocean through a drain which has now been blocked off, and “no additional oil is reaching the water.”

“Plains deeply regrets this release has occurred and is making every effort to limit its environmental impact,” the company said in a statement.

Environmental groups warned of the possible long-term impact of the spill.

The Environmental Defense Center lamented the spill, saying there were likely failings that allowed it to occur.

“There continues to be a number of questions… including why there was no automatic shut-off on this relatively new pipeline, and why the early response was not more successful in halting the flow,” said the group’s head Owen Bailey.

“This region is home to an incredible diversity of wildlife including numerous species of endangered whales and iconic coastlands that bring people from across the world to visit,” he said.

Kathryn Phillips, California director of environmental group Sierra Club, added: “Every time we hear about an oil spill, we hold our breath and hope it won’t get worse.”

“How many more signals do we need from the oil industry that public health and the environment aren’t at the top of its list when it decides how much to invest in creating its products?

“It’s time we all demand better from this incredibly wealthy industry,” she said.

The 24-inch pipeline, built in 1987, transports crude oil from a nearby above-ground oil storage facility to refineries throughout southern California. It typically operates at some 50,400 gallons per hour.

Santa Barbara was the scene of what was then the largest oil spill in US history, when in 1969 several million gallons of crude spewed into the ocean after an oil rig blowout. – Michael Thurston, AFP / Rappler.com