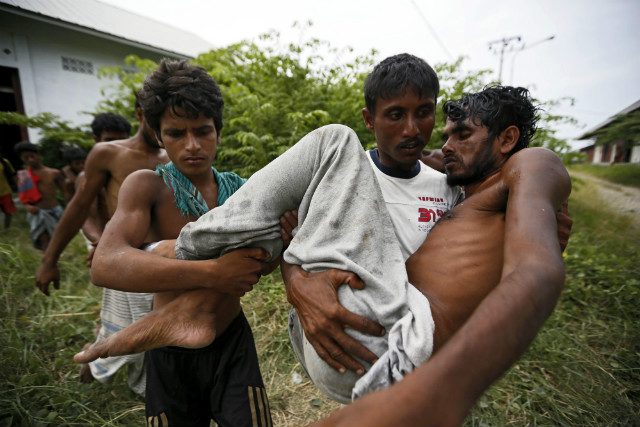 Facebook Twitter Copy URL
Copied
The Philippines says it is 'constrained by resource limitations' in the face of calls to help up to 7,000 Rohingya 'boat people'

MANILA, Philippines – The Philippines on Thursday, May 21, said rehabilitation efforts for Super Typhoon Yolanda (Haiyan) survivors will likely limit its aid for Rohingya “boat people” from Myanmar and Bangladesh.

“We are mindful that we are constrained by resource limitations, especially considering that we are still in the midst of implementing a massive rehabilitation and reconstruction program for areas affected by Typhoon Yolanda,” Communications Secretary  Herminio Coloma Jr said in a statement.

Yolanda, which killed at least 6,300 people in November 2013, thrust the Southeast Asian country in a P171-billion ($3.9-billion) reconstruction effort – its biggest since the end of World War II.

The Palace official, however, said the Philippines is coordinating with the United Nations High Commissioner for Refugees (UNHCR) on helping up to 7,000 Rohingya boat people. (READ: Will world now pressure Myanmar over the Rohingya?)

“We are in continuing dialogue with the local office of the UNHCR on how the Philippines may be able to meaningfully fulfill its commitment to the attainment of the UN’s humanitarian objectives,” Coloma said.

This comes after Coloma on Monday, May 18, said the Philippines is open to sheltering thousands of boat people from Myanmar’s ethnic Rohingya minority.

The UN has labeled the Rohingya as one of the world’s most persecuted minorities, rejected by Myanmar as foreigners from neighboring Bangladesh. (READ: FAST FACTS: Who are the Rohingya?)

Since Coloma first spoke about the Rohingya on Monday, Philippine officials have made several statements about the refugees.

De Lima, a former chairperson of the Commission on Human Rights, said this after Filipinos criticized their government for supposedly requiring the boat people to present travel documents before the Philippines could shelter them.

“They may be victims of persecution. In their desperation to leave the territory where their life or freedom has been threatened, or their human rights have been seriously violated, they even become willing victims of human smuggling,” she explained.

On Wednesday, Philippine Department of Foreign Affairs spokesman Charles Jose said the Philippines needs to consider its huge population in helping the refugees.

“We need to balance our international commitments and our national interest,” Jose said. – with reports from Agence France-Presse/Rappler.com