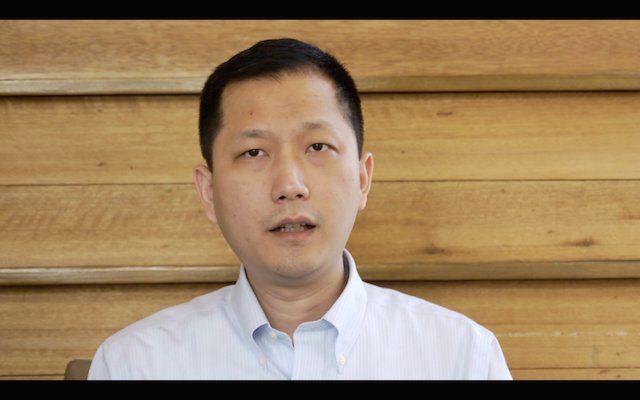 Facebook Twitter Copy URL
Copied
Tiu says, 'The most immediate thing for me to do is to try to clear my name so business can go back to normal and everything can go back to its original path'

MANILA, Philippines – His bank accounts are frozen and the operations of his businesses, in danger of being paralyzed. Even accounts shared with his 60-year-old mother, brother, and sister-in-law were ordered frozen over allegations of anomalous transactions.

The same estate he hoped would spark change in the country’s agriculture sector is also the basis of heavy accusations against him: that he is, in fact, a dummy of Vice President Jejomar Binay, who in turn, is accused of amassing wealth during his term as Makati mayor.

But for businessman Antonio Tiu there’s no saying goodbye to the Philippines.

“That has never crossed my mind,” Tiu told Rappler in a Monday, May 18, interview.

“I believe I have a mission in life, to change the agriculture sector of the country. Not until I have achieved something… I’m not going to give up,” he said, while admitting his family members – most of whom are already based overseas – have urged him to pack his bags and leave the country.

The same day, Tiu was cited in contempt and ordered arrested by the Senate for refusing to attend hearings held by the Senate Blue Ribbon subcommittee probing the allegations against Binay.

A few days later, the Senate held back his arrest, after he promised to attend future hearings.

Still, there is no trace of worry on the face of the 39-year-old. On Monday, fresh off a business trip to the Europe, Tiu looked emboldened – feisty, even.

“It’s just too much. The whole family is really angry and we will take all actions, whatever it takes to protect the interests of my family, including my mother,” said Tiu of the Anti-Money Laundering Council (AMLC)’s report on Binay and his alleged dummies bank transactions, the basis of a freeze order issued by the Court of Appeals (CA). (READ: Antonio Tiu files P100-M damage suit vs AMLC)

‘Not a crime’ to be linked to Binay

Tiu’s apparent connections to Binay include his college friend, lawyer Martin Subido, who is also the legal counsel of the Vice President and the law partner of his daughter, Makati Representative Abigail Binay.

Subido sits as corporate secretary for several of Tiu’s companies, including one flagged by the AMLC as among those with questionable deals.

Younger brother James is another link. Both James and his wife donated millions in campaign funds when Binay ran for vice president in 2010. James and his wife are also covered by the Court of Appeals’ freeze order, and face tax evasion charges – just like Tiu himself.

James, who Tiu describes as the more “brilliant” one, is the sibling with political aspirations. The younger Tiu once attempted to enter politics as a party-list representative for the agricultural sector, his brother said. He even used his older brother’s company name, Ani, for the potential party-list group.

“If he wants to serve the country as a politician, he has his rights and I will support that. I don’t really see that as a misstep. In fact, if given the chance, I would revive it and pursue it because I think the agricultural sector needs a voice and there are so many things that I want to be put into a law,” said Tiu of his younger brother.

It’s been trying times, to say the least, for Tiu, his family, his businesses, and friends. But there’s no letting go, as far as he is concerned: both for his biological brother and for a friend he considers a brother as well.

“It’s not a crime or a shame to be associated with the Vice President. It just so happened that there’s a group of people that is trying to paint a different picture,” he said.

‘AMLC got it wrong’

After months out of the spotlight, Tiu finds himself in both familiar and alien territory – attending one media interview after another, dodging accusations left and right.

But in this round, Tiu faces a bigger foe. The accusations are no longer just from a senator who was once his friend, or a vice mayor hellbent on pinning Binay for the alleged wrongs he’s done.

This time, Tiu’s foe is an institution that proved crucial in the fall of a former chief justice: the AMLC.

The council flagged several of Antonio Tiu’s bank transactions, including those between accounts owned by him and his companies Greenergy, Earthright, and Sunchamp, and SPCMB Law Office.

“The investigation further noted that despite Tiu’s supposed business losses in 2012 and comparatively small net profit of P22.45 million in 2013, the accounts under his name showed multiple large transactions,” the CA said, citing the AMLC report.

But Tiu insists there is nothing dubious about these transactions.

“I am 100% sure that the AMLC report is really malicious and baseless based on the part that they wrote about me. I’m 100% sure that I can justify it legally… any time, anywhere,” Tiu told Rappler.

And fight back, he did. Tiu on Wednesday, May 20, sued members of the AMLC for damages amounting to P100 million.

“Check their SALN and you will know why,” he said, when asked why he and his lawyers pegged damages at P100 million. It’s the same reasoning he used when he filed a P4-million defamation case against his friend-turned-foe Senator Antonio Trillanes IV.

It’s easy to doubt Tiu’s words when he speaks about the AMLC. With its unlimited access to bank transactions and track record, why doubt them? “After that report came out Monday, I started doubting the credibility of the AMLC,” said Tiu, referring to the CA report.

From then and until now, Tiu said everything that’s happened to him – from being dragged into Senate exposés to being cited in contempt by the Senate – are part of a “political battle,” in which he is a pawn.

Even before the hearings began, Tiu said, “emissaries” of the Vice President’s political foes were trying to reach him and were “asking him to lie.” After he said no is when the “threats” came, TIu said.

His communication with the Vice President, whom he describes as an acquaintance, hasn’t been “direct” since the so-called exposés began. But there exists another link between the two embattled men.

“I think the lawyer that is handling my case is also the same lawyer handling the Vice President’s case,” said Tiu.

Does he worry that people will see this lawyer as another link? “There are things in life that’s really just coincidence,” Tiu said.

More than 6 months since his name first made headlines, there is something different about Antonio Tiu. It could be the arrogance of a businessman who built for himself a multi-billion agriculture empire before turning 40, the confidence of someone who says he really did nothing wrong, or the surrender of a man who believes that at this point, there is nowhere to go but up.

“The most immediate thing for me to do is to try to clear my name so business can go back to normal and everything can go back to its original path,” he said.

And even if his name is now undoubtedly tied up with the biggest corruption scandal in the lead up to the 2016 elections, Antonio Tiu cannot be bothered to care too much.

He said, “I don’t really care about this. I’m not a politician. I’m just a simple businessman. But if you want to compare achievements in life, [look at] what I’ve achieved at my age, compared to those people sitting there doing nothing but talking, let’s see who is serving the country more.” – Rappler.com