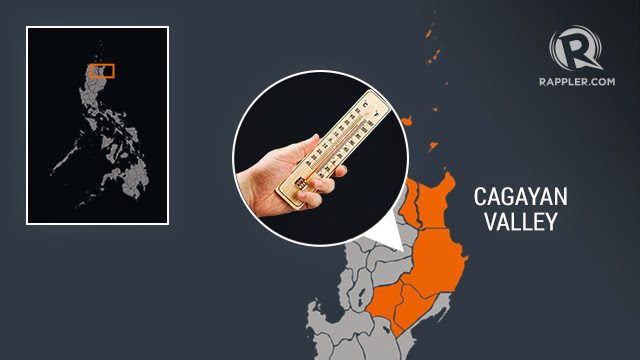 Tuguegarao, considered the hottest city in the country, may still expect higher temperatures the next few days, a local weather bureau officer said on Sunday, May 24.

This came after the warning of the Philippine Atmospheric, Geophysical, Astronomical Services Administration (PAGASA) that Metro Manila and Tuguegarao may experience scorching heat the following days. (READ: Metro Manila heat could hit 40˚C over the weekend)

“The summer is not over yet, so we expect higher temperatures,” said Northern Luzon PAGASA Regional Station Department (NLPRSPD) weather observer Ben Lavadia.

The city experienced its highest recorded temperature this year on May 2 at 38.7 degrees Celsius, with a heat index (temperature the body feels) of 42 degrees.

As of 11 am Sunday, temperature in the city recorded 36 degrees Celsius.

In Isabela, a man was found dead in in Cauayan City. The city health office believed that it was due to the hot weather.

Heat strokes are caused by direct exposure to the sun during hot and humid weather. Signs of heat stroke includes warmed and flushed skin, dizziness, headache, and fatigue, among others.

Purugganan warned the residents, especially those who have histories of hypertension, not to expose themselves in high temperature areas and to drink water regularly. (READ: Beat the heat: How to protect yourself with fruits this summer)

She added that wearing light-colored dresses will also help in deflecting the sun’s heat.