Why rich countries need to talk about the Philippines

This week, the G7 financial ministers will meet in Dresden, Germany. The German government is the host of this year’s G7 summit and will put climate financing and greenhouse gas reduction on the agenda. Chancellor Angela Merkel confirmed to double Germany’s financial support for climate adaption, but other countries have to follow and we are pressed for time, especially for the most vulnerable countries. (READ: Merkel and Hollande push for ‘ambitious’ climate deal)

It is a fact that small, developing countries like the Philippines are more vulnerable to the impacts of climate change. While adapting to climate change should be a priority, with very little finances available, adaptation plans will only remain as that – plans, which are futile without implementation.

The Philippine government has allocated 1 billion pesos (approximately $22M) through the People’s Survival Fund for the implementation of local climate change adaptation plans of local governments. However, the question is, with threats of more than 20 typhoons, which have become stronger, visiting the country each year, rising sea levels, damage to agricultural production, and food insecurity is this enough to strengthen all 81 provinces in the country, each facing different climate change impacts? 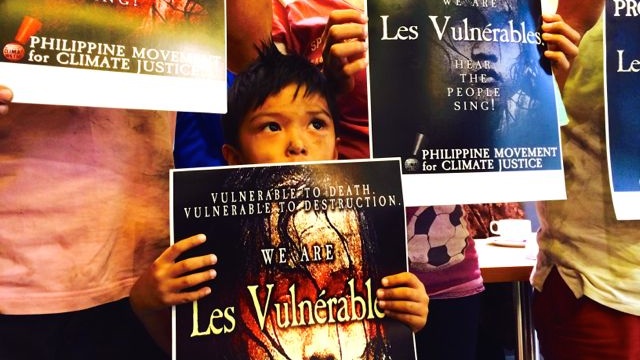 The industrialized countries confirmed $100 billion of financial support a year for climate adaption from 2020. However, it is not clear yet who will contribute how much and if the money will be paid anyway. It is important that the big industry nations make comprehensive contributions to climate financing to create trust among threshold and developing countries and such trust is vital to enable a climate treaty by the end of the year in Paris. And it’s a matter of fairness. The industrialized countries have built their wealth on a carbon intensive industries and bear a historical responsibility for the climate damages in the global South. Some might say $100 billion dollar is a lot of money, but as long the international community spends more than 50 times of that amount on fossil energy subsidies, no financial minister can honestly tell that there is no money to deal with the consequences of these subsidies.

It is important that the financial minister of the G7 tackle that issue. Germany wants to be a climate leader. Living up to that ambition does not just mean taking a first step, but also making the other countries follow you. Climate change has to be addressed by the G7 financial summit in Dresden and other countries have made their climate finance promises, too. It is a matter of fairness, but above all it is important to make these contributions to enable a climate deal in Paris.

Road to Paris and climate justice

With the Conference of the Parties 21 (COP 21) in Paris (READ: Elements of a good Paris Agreement on climate change) only 6 months away, industrialized countries like Germany must now make a stand to support climate adaptation and mitigation, including their commitment for a Green Climate Fund. While governments are busy debating, developing countries are busy ensuring their people’s survival amidst climate change and its impacts. A green climate fund is not sufficient for a comprehensive treaty in Paris, but a necessary condition for concrete climate action. – Rappler.com

Andreas Sieber, 23, is a German blogger and activist. He has worked for Greenpeace International, Oxfam and German State Government of Saxony. He has been involved in climate activism since 2007.