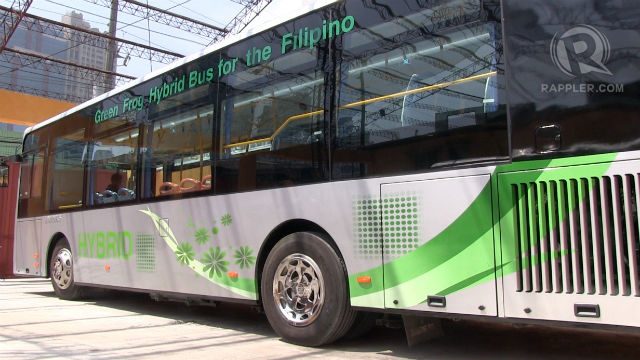 Green Frog Zero Emissions Transport, the first operator of partly electric buses in the country, announced that starting May 30, they will have to shorten their route.

Instead of their current Pasay-Makati-BGC route, their route will end in Makati, specifically in C5/Buting.

This is after the Bonifacio Estate Services Corporation (BESC) said it would charge every Green Frog bus P250 each time it enters BGC, a fee which Green Frog managers find excessive.

The amount translates to P12,500 a day or over P3 million a year, said Green Frog Managing Director Philip Apostol.

“Putting it in perspective: from Makati to Alabang via Skyway, a distance of over 20 kilometers, the toll is P164…BESC wants to charge us P250/bus/entry to use no more than 200 meters of BGC roads, That is the definition of exorbitant,” he said.

Such a fee would make current operations unprofitable, forcing Green Frog to exclude BGC from their route.

This will ultimately inconvenience the roughly 500 people who ride Green Frog buses to and from BGC, said Apostol.

It was at the request of passengers that Green Frog extended its line to Market! Market! in BGC starting last February.

But with the route shortened, the alternative for commuters is to take two jeepney rides: one from LRT Buendia or Taft to Guadalupe, and another from Guadalupe to Market! Market!

At P30 pesos, a Green Frog ride would be P2 more expensive – an expense bus passengers are willing to spend for the convenience.

(Many will suffer from this, especially us in the BPO industry. What a shame.)

(Where is the route going to be now? This is a hassle for us, unlike the single ride I take to work.)

(Many will have a hard time getting home. The hybrid buses are a great help to people. That toll fee is too much.)

BESC is yet to respond to Rappler’s questions regarding the fee. BESC is a corporation that manages the development of Bonifacio Global City.

According to its website, its mandate is to “promote the general welfare, property, service and reputation” of BGC.

BESC’s letter to Green Frog indicated that the fees are being imposed because of requirements the hybrid bus operator failed to meet.

The letter, dated May 26, was sent by BESC Manager Orliber Paule.

He said that 8 out of 10 Official Receipts for Vehicle Registration sent by Green were “already expired and are not classified as Hybrid vehicles.”

Paule added that Green Frog is only allowed to operate hybrid vehicles inside BGC.

Green Frog buses would only be allowed to enter BGC after the “advance payment of vehicle pass of 250.00/bus/entry,” reads the letter.

Aside from this, Green Frog was also asked to submit an updated Registration Form with the Land Transportation Office, endorsement from Taguig city government, updated emission test results and a monthly permit fee of P1,000.

The requirements, including the P250 per bus entry, are due on June 1, 6 days after the letter was sent.

But Apostol says all LTO registrations submitted to BESC are up-to-date. He said his bus company operates only hybrid buses.

He, however, admitted that they are yet to submit emission test results.

But he countered, “Are the jeepneys and the UV’s inside BGC subjected to the same rigorous standards? The answer is no, since you see ancient, smoke belching jeepneys in BGC.”

Hybrid buses, which run on a mix of electricity and diesel, have gained a good reputation for being energy-efficient and eco-friendly.

Such buses emit 80% less air pollution than a fully-diesel-powered bus. Using  the same amount of fuel, such buses can travel twice as far as typical buses.

Proposed laws like the Alternative Fuel Vehicle Incentives Bill attempt to provide perks to encourage such forms of transportation.

Fully-electric vehicles and hybrid vehicles are seen as a way to reduce air pollution in the metro.

Around 80% of air pollution in Metro Manila comes from vehicles, according to the Department of Environment and Natural Resources. – Rappler.com