This is among the panel’s recommendations in a draft report that called for the filing of plunder charges against the Vice President and his son, Makati Mayor Jejomar Erwin “Junjun” Binay Jr, over the Makati City Hall II parking building. (READ: Senate report: Binay ‘milked’ Makati building of P1.38B)

In the 46-page report released on Monday, June 1, the subcommittee said that Binay is the “true owner” of the 350-hectare property in Rosario, Batangas, despite his repeated denials.

“The Office of the Ombudsman [must] study whether or not the so-called ‘Hacienda Binay’ and all other ill-gotten wealth of the persons liable are proper subjects of forfeiture proceedings,” stated the report.

Besides plunder, senators also want Binay to face administrative charges for violating the Code of Conduct and Ethical Standards for Public Officials and Employees by failing to declare the property in his Statement of Assets, Liabilities, and Net Worth (SALN).

Ten senators signed the committee report, making it official and ready for endorsement before the Senate plenary. Senator Aquilino Pimentel III, chairman of the subcommittee, drafted the report.

Allegations that Binay owned the estate became a highlight of the Senate inquiry; images of the property hit the front pages of newspapers, and topped newscasts last year. After the controversy, Binay’s popularity declined in opinion polls.

The property includes a flower farm, a rare bird sanctuary, a man-made lagoon, a breeding area for fighting cocks, a maze garden, and even supposedly an airconditioned piggery.

Businessman Antonio Tiu said he owned the Rosario property but the Senate report said his attempt to “muddle the issue” did not work. (READ: Does Antonio Tiu really own ‘Hacienda Binay?’)

“The subcommittee believes that the vast Rosario, Batangas, property brought up in our hearings by former [Makati] vice mayor Mercado is owned by Vice President Binay,” the report stated.

As Rappler earlier reported, the Senate found that documents showed that some parcels of land within or near the property are under the names of Binay’s aides and friends:

The panel said, “What is the common denominator of all these people? Vice President Binay.”

The subcommittee also said that social media posts, pictures, and a magazine article showed that the Binay family had “the actual possession and enjoyment of the property.”

Binay’s youngest daughter, Joanna Marie Binay, posted on Instagram a photo of the pool in the property with the caption, “Our place in Batangas.” Majority Leader Senator Alan Peter Cayetano presented this post in a hearing in October 2014.

The Senate also said that the piggery business and the flower farm in the Batangas property belonged or used to belong to the Binays or to companies involving them.

In the October hearing, Mercado famously said that Binay’s wife wanted the piggery airconditioned because she “hates the smell of pig manure.” Mercado said that Mrs Binay had the property patterned after Britain’s Royal Botanical Gardens reportedly because of her plans to become first lady.

Lawyer Martin Subido, the Vice President’s legal counsel, said that Binay used to operate a piggery in a small portion of the compound – about 9 hectares of leased land – but he has sold the business in 2010 to Agrifortuna Incorporated owned by a certain Laureano Gregorio.

Yet the report said this too was an indication that Binay owned the property.

“Even the corporation (Agrifortuna Inc) alleged to be the original owner of the Rosario, Batangas, property was formed with Vice President Binay and his wife Dra Elenita Binay as incorporators.”

It added that the treasurer-in-trust of Agrifortuna at the time of its incorporation was Ebeng Baloloy, Binay’s girl Friday who enjoys his full trust and confidence. 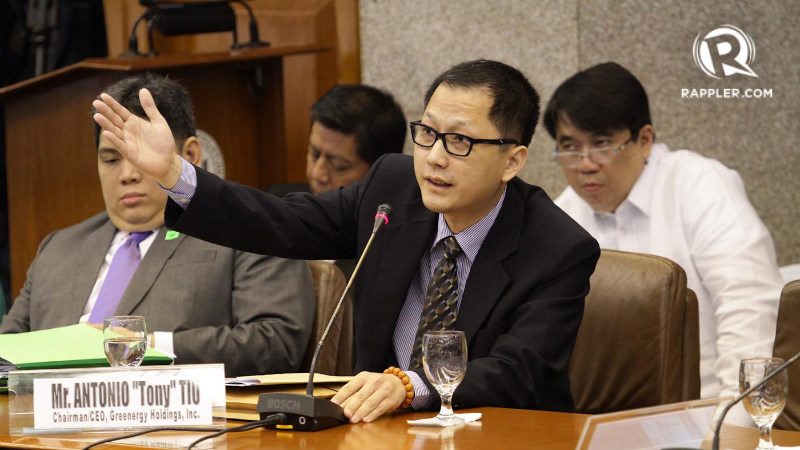 Vice President Binay was irked when repeatedly asked about his supposed ownership of the estate. His spokesman, Rico Quicho, said that documents show that Binay is not the owner of the property.

Subido also said that the entire compound is only 145 hectares, not 350 hectares as Mercado claimed. It was supposedly Gregorio who entered into a Memorandum of Agreement with Tiu’s Sunchamp Real Estate Development Corporation for the rights to the entire compound in 2013.

“Sunchamp Real Estate Development Corporation is the absolute owner of the improvements and facilities mentioned in today’s inquiry. In fact, Sunchamp Real Estate Development Corporation has likewise introduced new improvements such as an asparagus farm, greenhouses for high value crops, hotel, all in line with its vision to create an agri-tourism park,” Subido said last year.

Still, the Senate report said that Tiu could only present a one-page unnotarized agreement between him and Gregorio to prove that he owns the property.  (READ: Can Antonio Tiu tell a lie?)

Senators added that it was allegedly Subido who brokered the unnotarized deal between Tiu and Gregorio.

“The extensive and deep connection of Mr Antonio Tiu with Vice President Binay cannot be denied, and hence, cannot just be ignored, and should be taken into account in the assessment of Tiu’s testimony,” the report said.

Tiu promised to cooperate with the Senate probe after being cited in contempt for skipping the recent hearings. – Rappler.com