Facebook Twitter Copy URL
Copied
There are only about 150 labor laws compliance officers in the region catering to over 37,344 establishments, far from the recommendation of the International Labor Organization

MANILA, Philippines – Even after President Benigno Aquino III has beefed up the labor department’s Labor Laws Compliance System (LLCS) with additional manpower, the current compliance-officer-per-establishment ratio in Metro Manila remains below the ideal.Metro Manila would need more Labor Laws Compliance Officers (LLCOs) under the LLCS, which government boasts as a revolutionary reform in workplace inspection and assessment, Rappler found.There are only about 150 LLCOs in the region for over 37,344 establishments, said Department of Labor and Employment (DOLE) Metro Manila Director Alex Avila.The current figure is a far cry from the International Labor Organization (ILO) recommendation of 120 establishments per inspector a year, Avila added.A majority of establishments nationwide and in Metro Manila are micro businesses with assets totaling P3 million and below. These are not part of the establishments assigned to Metro Manila’s LLCOs.However, DOLE records show that 35% of the country’s small, medium, and large businesses can be found in Metro Manila.DOLE is keen on appointing additional directors in DOLE Metro Manila to assist Avila.

Effectiveness of the LLCS questionedLabor groups expressed concern over the effectiveness of the LLCS following the May 13 fire that gutted the two-storey footwear factory of Kentex Manufacturing, which killed at least 72 people.Labor coalition Nagkaisa slammed the system, saying it is tantamount to allowing employers to dictate the terms of the compliance assessment.This, after it was found that Kentex was able to secure a certificate of compliance under the LLCS on September 18, 2014, despite glaring violations in general labor standards.Later on, it was discovered  that Kentex employed a dummy or a labor-only contractor in hiring 99 of its estimated 210 workers.These workers listed under Kentex subcontractor CJC Manpower Services were underpaid and denied benefits mandated under the Labor Code. Health and social insurance premiums deducted from their salaries were also not remitted to PhilHealth and the Social Security System, respectively.Aquino has said that the Valenzuela local government and Kentex management are among those being probed for criminal and administrative liability over the fire, but civil society groups have called for accountability on the part of DOLE as well. Avila approved the compliance certificate of Kentex on the basis of a joint assessment conducted on March 17, 2014 by LLCO and Engineer Joseph Vedasto, who is now under investigation.100% better than the oldSince its inception, the LLCS has expanded its checklist of laws and rules that need to be considered by an LLCO during an assessment of a workplace.Labor Undersecretary Rebecca Chato told Rappler that at the time of the Kentex assessment, the compliance certificate of a business’ subcontractor was not yet part of the checklist.Chato admitted that the LLCS is a “work in progress” but insists it is a significant improvement from the more immediately punitive and enforcement-heavy Labor Standards Enforcement Framework (LSEF) that came before it.“We are sure it’s better than the old [system] – 100%,” said Chato. The LLCS, endorsed at the tripartite level and implemented with the assistance of the ILO, uses technology to immediately record assessment results.A tablet is provided to an LLCO where he or she can enter the assessment results, and transmit to the DOLE database in real time.Previously, there was little to no way of verifying the inspection results of a labor inspector under LSEF.A 2009 ILO report that the labor inspection system then had no major impact on labor laws compliance prompted the shift from LSEF to LLCS in 2013. There were only 193 labor inspectors for 784,000 companies then, and establishments were inspected  once in 16 years.In December 2014, the United States announced a $1-million grant to the Philippines through the ILO meant for DOLE’s LLCS.Less prone to corruptionUnder the LSEF, Chato said employers would often “just pay” labor inspectors to not issue them a compliance order, which gives the business owner 10 days to address  violations of labors standards in the workplace.At times, the employer would address the violations but would revert to his or her errant ways after the inspection is conducted.The LLCS, Chato explained, uses an approach that allows constant dialogue between the LLCO and the employer during the assessment process. Making the employer understand his or her obligations under the law is a key part of the “developmental approach” of the LLCS, the DOLE official said.“The proactive thing is to educate everybody,” said Chato, adding that labor violations could be reported by the workers themselves or even a bystander if they are aware of their rights under law.Chato said DOLE-led seminars on general labor standards and occupational safety and health standards are underway. 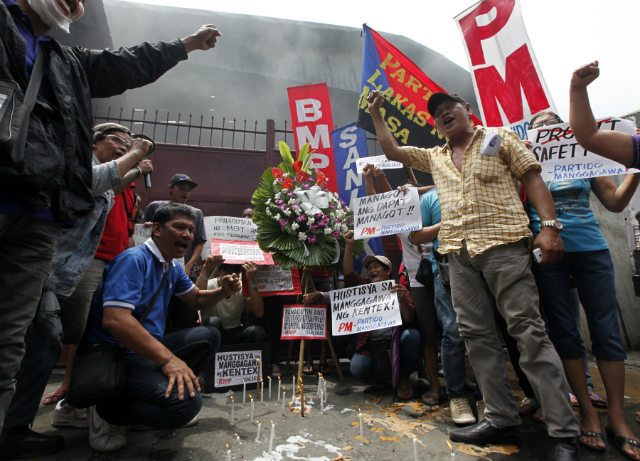 Worker representationPart of the “joint assessment” under LLCS is also the representation of workers in the process, she said. This means that the compliance certificate issued to Kentex was not just based on DOLE’s assessment. Chato said she has urged labor groups to innovate in their ways of organizing, reminiscing the days when a strike in Valenzuela meant a major disruption in operations considered as economy drivers.Despite being an industrial city, Valenzuela has few genuine labor unions relative to the number of companies there, labor leaders lamented.Philippine trade unionists have decried dwindling union density in general, blaming waning unionism on aggressive union-busting by employers.Latest state figures show newly-registered unions in the Philippines are at their lowest since 1976, with only 126 new unions registered in 2013.Punishing errant LLCOsWhen he assessed Kentex in March 2014, LLCO Vedasto failed to bring his DOLE-provided tablet. He said he feared being mugged in Barangay Ugong, where Kentex is located, which he described as known for its criminal elements.Chato warned against pre-judging the investigation on Vedasto and the Kentex incident.An errant LLCO is covered by administrative penalties under civil service rules, she added.For 2015, Baldoz has authorized 465 LLCOs – 297 ranked senior labor employment officers and 168 labor and employment officers III – to conduct joint assessment and compliance visits of 76,766 establishments nationwide.

Subject to LLCS are businesses engaged in hazardous work, employers of child employees, engaged in contracting and subcontracting arrangements, Philippine-registered ships or vessels engaged in domestic shipping, and those employing 10 or more employees.Setback for PH manufacturing The deadly Kentex fire is viewed as a setback for the Philippine manufacturing industry, an industry like many in developing and booming economies that attract foreign investors partly due to cheap labor.Surviving relatives of workers engulfed by the fire told Rappler of horrid conditions inside the factory, including lack of masks amid the stench of paint and processed rubber, extreme heat, and long hours without the corresponding overtime pay, among others.Fifty-year-old Marietta “Marie” Madiclom, a Kentex casualty, toiled in the footwear factory for 15 years without health insurance, social insurance, an assured minimum wage, and other law-mandated protection for workers, her husband said. Labor rights advocates fear sweatshop-like conditions in factories and plants that line the area in the village of Ugong, the site of the Kentex factory.At scheduled intervals, villagers in house clothes and in slippers congregate in front of tall gates to enter the walled buildings where they work as low-wage earners.Labor groups have seized the aftermath of the unfortunate incident as an opportunity to push for pro-worker reforms, including stronger regulation, if not a complete ban, on contractual labor.
Kentex owes the illegally subcontracted workers at least P7.8 million in unpaid wages, excluding benefits such as overtime pay, night differential, 13th month pay, holiday pay, vacation and  sick leave pay, refund of cash bond, and others.The Kentex fire is considered the largest industrial accident in the Philippines in recent decades and the third largest fire in terms of casualties in the country’s history.Baldoz and labor groups had reiterated their call to criminalize grave violations of occupational safety and health standards by employers, as the 4-decades-old Labor Code merely imposes a fine for OSH offenses regardless of lives lost. – Rappler.com