Most Filipinos want to delay, scrap K to 12 – poll 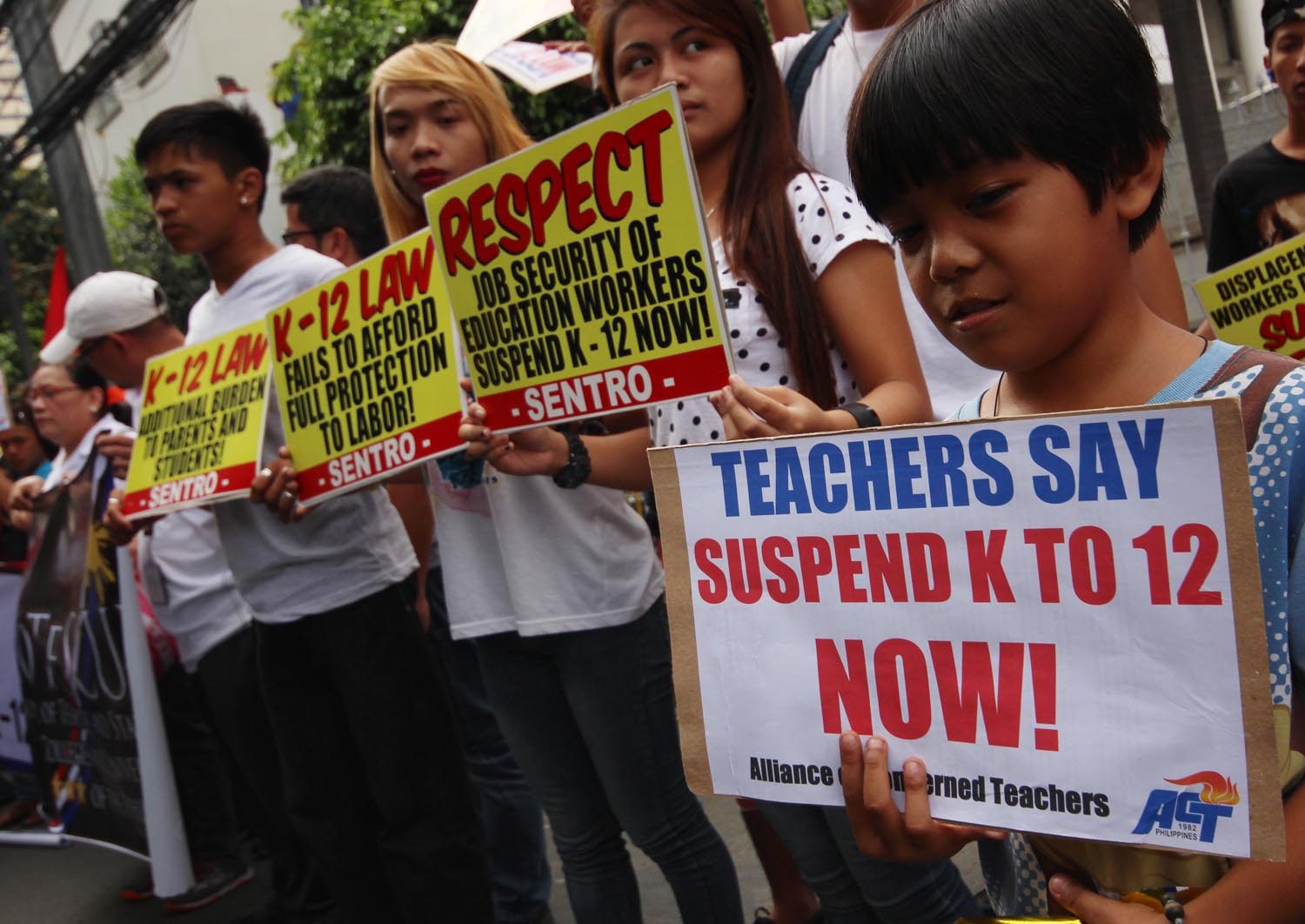 MANILA, Philippines – Most Filipinos want the government to scrap the K to 12 program or to delay its full implementation in 2016 if it will lead to a massive displacement of college workers, a recent survey revealed.

According to a survey published by newspaper The Standard, 71% of respondents nationwide “think it is better to defer the implementation of the K to 12 program, or scrap it altogether.”

The number rose from 65% after survey respondents were told of the potential displacement of teaching and non-teaching staff in higher education institutions (HEIs) come 2016.

Because of this, HEIs expect a drop in enrollment during these two years all the way to school year 2021-2022 when things are expected to normalize.

This will affect workers in HEIs, as latest estimates from the Commission on Higher Education showed 13,634 teaching staff and 11,456 non-teaching staff may be displaced.

The Standard Poll was conducted by veteran pollster Junie Laylo among 1,500 respondents between May 8 and May 18. The survey had error margins of +/- 3% for national results, and +/- 6% for regional results.

When asked if the country needs senior high school or the additional two years in K to 12, 61% of respondents nationwide disagreed, 34% agreed, and 4% did not know enough to make an opinion.

Data from The Standard Poll

Among the regions surveyed, Northern Luzon and Central Luzon have the most number of respondents who believe the Philippines does not need senior high school.

Most of the respondents (63%) nationwide also believe the government is not very ready to fully implement the K to 12 program in 2016.

Data from The Standard Poll

In Mindanao, the percentages are close between those who support K to 12, and those who are against it. About 49% believe senior high school is needed and that the country is ready for its rollout next year, while 48% disagree.

Sought for a comment, Education Secretary Armin Luistro told Rappler on Thursday, June 4, that The Standard Poll “may or may not be conclusive as it has its limitations.”

He reiterated that in 2013, DepEd conducted a nationwide SWS survey on the public perception on K to 12.

“[It] showed that close to 70% of Filipinos believe that the said education reform will better equip high school graduates for work, higher education, and business,” he added.

The newspaper’s survey comes as more and more groups show their opposition against the measure.

Just a week ago, two separate petitions against the K to 12 were filed before the Supreme Court. This is on top of two petitions already pending since March. (READ: Lawmakers file second petition vs K to 12 before SC)

And on Monday, June 1 – the first day of school year 2015-2016 – teachers’ group Alliance of Concerned Teachers staged protests against K to 12 in different parts of the country. They also held a signature campaign for parents who want the program suspended.

Aside from displacement woes, critics believe the country is not yet ready for K to 12 since the government has yet to address basic needs in education.

But the education department has always insisted it has addressed backlogs in classrooms, school seats, textbooks, and teachers. (READ: Luistro: No one can stop K to 12 at this stage) – Rappler.com