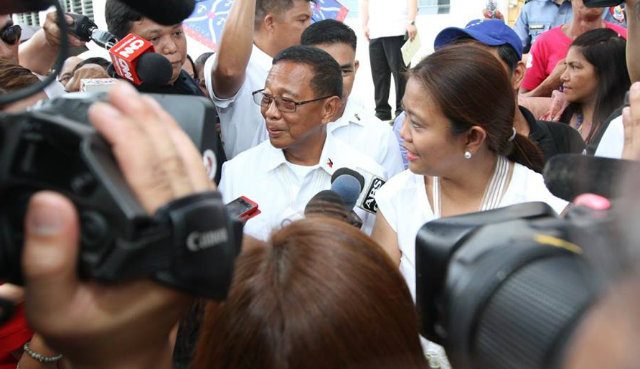 Facebook Twitter Copy URL
Copied
Senator Koko Pimentel says if his version of the anti-political dynasty bill passes, Senator Nancy Binay will have to resign for her father to run for president in 2016

MANILA, Philippines – If the current Senate version of the anti-political dynasty bill becomes law, Senator Nancy Binay will have to resign for her father, Vice President Jejomar Binay, to run for president in 2016.

Senate electoral reforms committee chairman Aquilino Pimentel III said he will push for a stricter version of the bill compared to the one pending before the House of Representatives.

Under the bill Pimentel is finalizing, only one family member will be allowed to hold public office from the barangay (village) to the national level. The senator said that this would mean that in the case of the Binay dynasty, the 3 children presently in office will have to give way to their father’s presidential bid.

“Nancy Binay’s term is until 2019 so she is the incumbent national official. Therefore, if her father who is related to her by one degree [of consanguinity] wants to run for public office, this time for president, the family has to decide,” Pimentel said on Wednesday, June 10.

“If the father will run for president, the national official must resign because the mandate of the bill when it becomes law is to prevent the dynastic situation,” he added.

The 1987 Constitution provides for equal access to public service, and prohibits political dynasties but the lack of an enabling law made the problem persist for the past 28 years.

In the House, lawmakers are considering a version of the bill that allows up to two members of a political clan to hold public office at the same time. They could either both hold national posts, local positions or a combination of the two. The House is expected to pass the bill on second reading.

Yet Pimentel wants only one family member to be elected. “If there are two, that is already a dynasty.”

Under this set-up, the senator said that Mayor Binay can no longer run for reelection in 2016 if the bill is passed before the October filing of certificates of candidacy.

“Because if there is an incumbent national official closely related within two degrees, that’s a dynasty. Even a sibling in Congress, that is also not allowed because the incumbent (Senator Binay) is a national official,” he said.

Pimentel has been leading the Senate panel investigating corruption allegations against the Binays. He wrote the committee report recommending plunder charges against the Vice President and Mayor Binay over the allegedly overpriced Makati parking building.

Still, he said his anti-political dynasty measure does not target them.

“If it was meant to target them, then we should have acted on this a long time ago. If we cannot pass this before October, we can easily make it applicable to the next scheduled election after 2016.”

Binay: What about democracy icons?

Pimentel’s electoral reforms committee has been holding hearings on the anti-political dynasty bill.

He said he will come up with a final version of the measure, and then gather the signatures of at least 6 senators in his 11-member committee when session resumes in late July. After this, plenary debates can start.

Pimentel is optimistic that the bill will pass in a chamber where most members belong to political dynasties.

In the 16th Congress, siblings Alan Peter and Pia Cayetano both occupy Senate seats, along with half-siblings Jinggoy Estrada and JV Ejercito. Senator Bam Aquino is the cousin of President Benigno Aquino III. Senator Ferdinand Marcos Jr holds office, while his mother former First Lady Imelda Marcos is Ilocos Norte Representative, and his sister, Imee, is governor of the province.

“It is better if we include even national positions because the Senate might be criticized that we are passing an anti-political dynasty law which does not affect or cover us,” Pimentel said.

The senator added that it is best to pass an anti-political dynasty bill before the end of the Aquino administration.

“It has passed the committee level in the House, and they are ready for plenary discussion. That is already a big achievement. Number two, the chair of the Senate committee is open and enthusiastic in submitting a stricter anti-political dynasty bill so the best time is now,” Pimentel said.

Vice President Binay opposes any version of the bill.

(How come when it involves icons of democracy, this is not an issue? It only becomes an issue because of violence.)

Binay said the idea should be subjected to a plebiscite.

“Sa malinis na halalan, bakit pagbabawalan? ‘Di ba vox populi, vox Dei? Bakit mo haharangan?” (In a clean election, why will you bar families from running? Isn’t it that the voice of the people is the voice of God? Why will you stop this?)

Poe: Not all have conscience

Senator Binay shared her father’s position. She said that if children are allowed to be doctors and lawyers like their parents, the offspring of politicians should also be given the chance to hold public office.

“At least ikaw kung gusto mong maging doktor katulad ng magulang mo, all you have to do is take a course, and then pass the board or bar. Puwede ka nang mag-practice ng profession, whether doctor or lawyer. Eh kami, kahit gustong-gusto naming maging public official, for as long as the people don’t vote you into office, eh hindi ka magkakaroon ng posisyon,” Senator Binay said on Tuesday.

(At least if you want to be a doctor like your parents, all you have to do is to take a course, and then pass the board or bar. You can already practice your profession, whether as a doctor or lawyer. But for us, even if we really want to be public officials, for as long as the people don’t vote you into office, you won’t have a position.)

Senator Binay was forced to run for office in 2013 to complete the senatorial slate of her father’s political coalition, the United Nationalist Alliance (UNA). The former personal assistant of her parents, Binay was elected senator even without holding an elective or appointive post. (READ: Nancy Binay, the accidental candidate)

Senator Grace Poe, reported to be a challenger to Vice President Binay’s candidacy, said she is in favor of having an anti-dynasty bill.

Using Senator Binay’s analogy, Poe said she could also have joined show business but her parents, the late action star Fernando Poe Jr and actress Susan Roces, had a “conscience.”

(If you are in showbiz, if your child is as attractive as you, he or she will also likely be a celebrity. But some parents have a conscience. It’s a good thing my parents saw that, “Oh, this girl is not showbiz material.” I was not forced, right? Not all have that conscience. Some, even if they have no right to serve in public office, are still forced into it.)

Poe said this was why she believes there should be restrictions for political families.