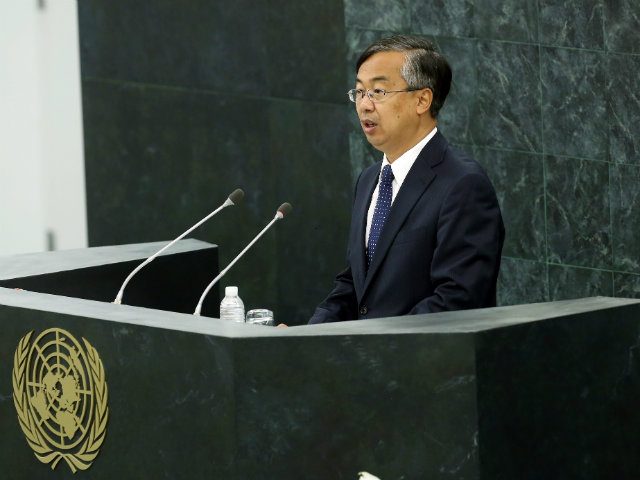 Facebook Twitter Copy URL
Copied
China's deputy ambassador to the UN says, '[The Philippines'] calculations are totally wrong. No matter what they say, they will never get their way'

MANILA, Philippines – A Chinese diplomat at the United Nations (UN) lashed back at the Philippines’ criticism of its massive reclamation in the South China Sea, saying Manila has a “clear purpose to deceive the international community.”

China’s deputy permanent representative to the UN Wang Min took exception to statements from the Philippine ambassador to the world body against Beijing’s reclamation work in disputed waters.

At a meeting at the UN Headquarters in New York on Friday, June 12, Philippine Permanent Representative to the UN Lourdes Yparraguirre said that China’s artificial island-building is a form of “intimidation, coercion or force.”

Wang responded by calling the Philippine statements “unwarranted accusations.” He insisted that China will continue with its reclamation work despite protests from “that country.”

“Let me make this very clear to that country here: its calculations are totally wrong. China’s will to safeguard her sovereignty and territorial integrity is rock firm. No matter what and how much they say at this meeting or any UN venues, they will never get their way,” Chinese state media Xinhua quoted Wang as saying.

The Philippine Department of Foreign Affairs (DFA) said on Sunday, June 14, that Yparraguirre took the annual meeting of State Parties to the UN Convention on the Law of the Sea (UNCLOS) as an opportunity to express Manila’s concern about China’s “increasingly aggressive rhetoric and action in the South China Sea.”

The Philippine envoy said that China’s “massive, large-scale land reclamation” was a unilateral and aggressive action that threatens UNCLOS, known as the constitution for the oceans. The Philippines and China are both state parties to UNCLOS.

In the past 18 months, China has been building artificial islands in maritime features that the Philippines is contesting under a historic arbitration case Manila filed under UNCLOS before the Permanent Court of Arbitration in The Hague. A hearing is set in July. (READ: What’s at stake in our case vs China)

Wang reiterated China’s stance that its construction work is legitimate.

“China’s construction activities on her islands and reefs are conducted in the Chinese territory, falling entirely within the scope of China’s sovereignty. It is legal, justified and reasonable,” he said.

Wang sought to address the concern of claimant countries and the United States about reclamation by saying that it will “not undermine other countries’ lawful right to the freedom of navigation in the South China Sea but will facilitate their joint response to challenges on the sea and provide more guarantee for navigation safety.”

China has maintained that its reclamation activities are for both defense and humanitarian purposes like maritime search and rescue, disaster prevention and relief, and scientific research. Yet analysts call this a “PR spin.” (READ: The China challenge in the West Philippine Sea)

Satellite images showed that China is constructing an airstrip, port facilities, cement factories, barracks, and other installations that will allow it to maintain de facto control of the disputed sea. (WATCH: Rappler Talk: The Philippines and China’s ‘Great Wall of Sand‘) The Philippine ambassador pointed out that China’s reclamation work is meant to change the status of the maritime features ahead of the ruling of the tribunal expected in early 2016.

“There should be no pattern of forcing a change in the status quo in order to advance a so-called nine-dash line claim of undisputed sovereignty over nearly the entire South China Sea,” Yparraguirre said.

Yparraguirre defended the Philippines’ decision to go to arbitration, calling it “a pacific and rules-based mode of settling disputes.” She said that bilateral negotiations with China proved “futile and one-sided” because of “lack of good faith.”

Yet Wang slammed her argument, insisting on China’s preference for country-to-country talks where the rising Asian superpower can assert its economic and political influence.

“China urges that country to correct its erroneous actions and return to the right track of resolving the disputes through bilateral negotiations as soon as possible,” Wang said.

The Philippines’ maritime dispute with China escalated in recent months after satellite images exposed the scale of Beijing’s construction work in the strategic sea. The Philippines’ treaty ally, the United States also stepped in, condemning reclamation and promising to continue naval and air patrols near the artificial islands. (READ: ‘China miscalculated US response to reclamation’)

Vietnam, Malaysia, Brunei, and Taiwan also have claims to the South China Sea, believed to hold vast deposits of oil and gas, a rich fishing site, and a major global shipping route.

Besides raising legal and geopolitical concerns, the Philippines stressed that China’s reclamation work is “an environmental crisis.”

“[China] has had to dredge out and pulverize entire systems of coral reefs that took many centuries to grow, reducing them into landfill, and thus devastating the already fragile marine ecosystem and biodiversity of the region by irreparably destroying  the habitat of depleted, threatened or endangered species and other forms of marine life,” said Yparraguirre.

In another Philippine-organized forum at the UN on Wednesday, June 10, marine science expert Dr. Edgardo Gomez estimated that the 800 hectares of reclamation China did amounted to an annual loss worth US $280 million in ecosystem products and services.

“These are losses to the Vietnamese, the Filipinos, the Malaysians, the Indonesians, and to the Chinese themselves,” said Gomez, professor emeritus of the University of the Philippines Marine Science Institute.

“All countries that are contributing to the degradation and destruction of the shallow water ecosystems must stop their activities that are known to be detrimental to the productivity and biodiversity of the waters of Southeast Asia,” Gomez added.

The Philippines, Vietnam and Taiwan have also done construction work in the features they control but not to the extent that China has. – Rappler.com