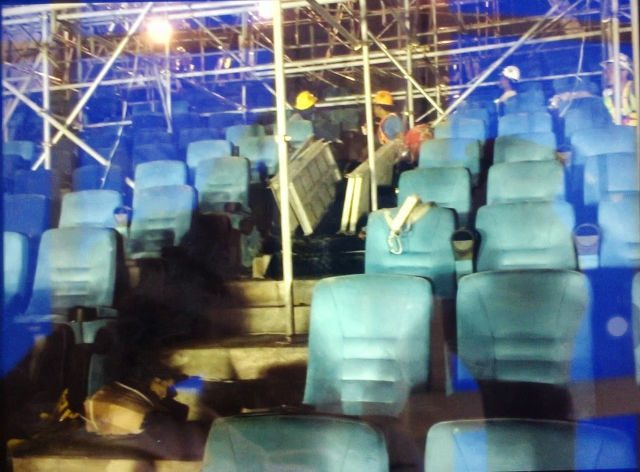 CEBU CITY, Philippines (UPDATED) –  Experts from the composite team who inspected Ayala Center Cebu’s cinema doubt the mall’s initial findings that the ceiling collapsed because of a problem in the sprinkler system.

According to city councilor Dave Tumulak, chairman of the Cebu City Disaster Response Team, in “simple terms,” the sprinkler system only broke down when something heavy had hit it. As to what it is, it is up to the mall management to find out.

Tumulak explained that experts on the composite team had found out that the part of the sprinkler system, which would trigger the water to come out during a fire alarm, remained intact. This means that it was the not the sprinkler system that caused the ceiling to fall over the people at the cinema.

“Nganong nahagbong man ang ceiling? Dunay possibility na dunay bug-at nga naka-datog didto sa water sprinkler?” (Why did the ceiling fall? There is a possibility that there was something heavy that hit the water sprinklers),” Tumulak further explained.

The sprinkler system only broke as an after effect when it was hit by what he called the “conclusive and real” source of the collapse of the ceiling.

At around 2 pm today, June 17, a composite team, led by the Office of the Building Official (OBO), Bureau of Fire Protection Central Visayas (BFP-7), and the Cebu Contractors Association were allowed inside Cinema 5 while workers continue to work on the ceiling.

The OBO is giving Ayala Center Cebu management 7 days to find out the cause of the incident. Aside from that, necessary corrections and rehabilitation of parts of the facility should have also been accomplished. “If this will not be complied, the OBO will pursue sanctions based on the law,” said Tumulak.

At least 350 people were inside the mall’s Cinema 5, the newest theater facility within the expansion wing of the Ayala Center opened last 2014. Nine people were rushed to the hospital for various wounds and injuries.

As of June 17, only one of the 9 is left at the hospital awaiting further tests, said lawyer Jeanette Japson, Corporate Communications Officer of Cebu Holdings, Inc., the company that operates Ayala Center Cebu.

After less than an hour inside the theater, the group immediately held a close-door meeting inside one of the mall’s board rooms. Guards are being spread throughout the perimeter and hallways leading to the cinema and were instructed to prevent the entry of media and other unauthorized people. Photos and Cameras were also prohibited near the area.

Speaking on behalf of the composite team, Tumulak said that the OBO is suggesting specific tests to the mall management, who were present during the meeting. “The management is asked to submit also their recommendation and rehabilitation works if any. As of now wala pa gyud makita ug asa gikan ang problema,” said the City Councilor, who was among the first ones to respond to the distress call from one of the participants in the activity inside cinema 5. (There is nothing you can see as to where the problem actually started)

Dreamscape Networks International held a corporate event for their staff and their guests when the ceiling collapsed on June 15, shortly before 9 pm. People inside the cinema were watching a video screening when water started to pour from the ceiling. A few seconds later, the ceiling fell.

Ayala Center Management hired a private firm SY2 to conduct safety tests on the cinema and other parts of the mall.

At city hall this morning, Cebu City Mayor Michael Rama had called for a meeting with mall and cinema owners to discuss safety systems and protocols in their establishments. – Rappler.com