Jun 18, 2015 9:53 AM PHT
Miriam Grace A. Go
Facebook Twitter Copy URL
Copied
(UPDATED) Pulse Asia's survey, conducted nationwide May 30-June 5, shows that 30% of respondents would vote for her if the 2016 elections were held today 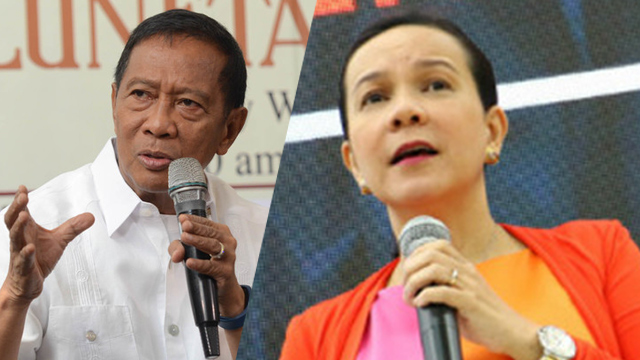 The survey conducted by Pulse Asia from May 30 to June 5 showed Poe with a preference rating of 30% nationwide, compared to Binay’s 22%. 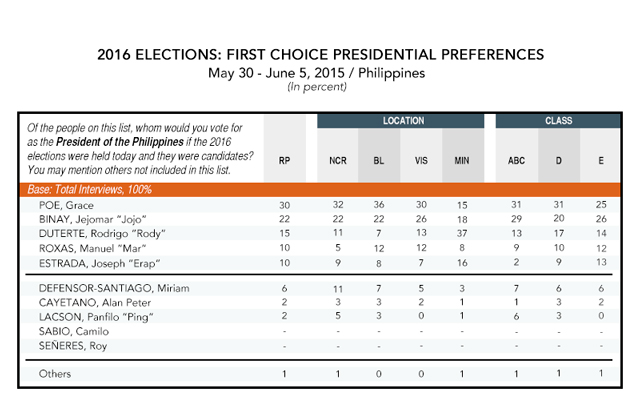 Rappler obtained a summary of the survey results from a poll subscriber.

This is the first time the Vice President didn’t top quarterly surveys on the 2016 presidential polls since he declared his intention to seek the nation’s highest post a few years ago.

In the last survey conducted in May by another pollster, Laylo Research Strategies, Binay’s hold on the top spot was already precarious, with only support from Mindanao keeping him No. 1 nationwide. In that survey, Poe was already No. 1 in Metro Manila, in the remainder of Luzon, and in the Visayas.

In April, another survey by Social Weather Stations showed Binay and Poe in a statistical tie.

Pulse Asia’s latest May-June survey also showed Davao City Mayor Rodrigo Duterte still on the 3rd spot with 15%, but this time already ahead of former president and now Manila Mayor Joseph Estrada, who was preferred by 10%. The two were previously tied at 3rd spot in a survey conducted in March.

Pulse Asia’s “Ulat ng Bayan” survey had 1,200 respondents nationwide, with a margin of error of ±3.

Respondents were asked, “Whom would you vote for as president of the Philippines if the 2016 elections were held today and they were candidates?” Respondents were allowed to indicate names not on the survey list. The following names were preferred:

Poe was the most preferred in all island groupings, except in Mindanao, where Duterte, a Mindanaoan, was the top choice with 37%.

Poe got her highest preference rating, 36%, in Luzon, excluding Metro Manila. She got 32% in the National Capital Region, 30% in the Visayas, and 15% in Mindanao.

Binay, meanwhile, got his highest preference rating, 26%, in the Visayas, ironically a supposed bailiwick of his 2010 rival Manuel Roxas II, the Liberal Party’s presumptive presidential candidate. He was preferred by 22% in Metro Manila, 22% in Luzon, and 18% in Mindanao.

Across all socio-economic classes, except the poorest segment, Poe beat Binay as the most preferred candidate.

Except among class D, their differences in percentage points were well within the error margin.

Senator Poe also topped the vice presidential poll, with a 41% preference nationwide. She was followed by Senator Francis Escudero with 15%.

The two senators, longtime friends and allies, recently indicated they might team up if they decide to run for president and vice president in 2016. 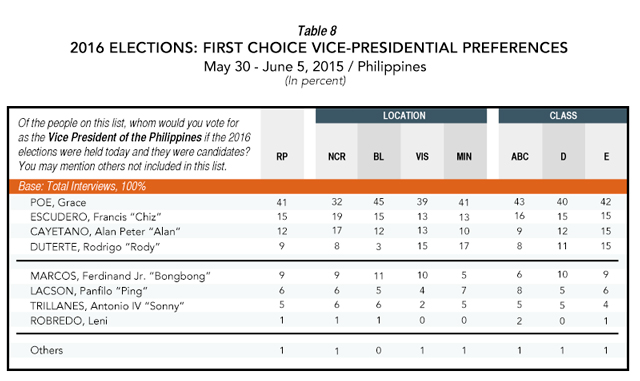