Want to be a freelance writer?

MANILA, Philippines – Freelance used to mean an unsteady and unpredictable life, jumping from one job and hoping for another.

But with the changing business models in media, writing and consultancy, freelancing has become the new industry normal. Media companies are shuttering down and cutting costs by trimming down full-time staff.  Contracting freelance writers is a way for companies to balance the ever-increasing demand for content and maintaining the bottomline.

Being a freelance writer now offers numerous possibilities, including that of being a sustainable, fulfilling career.

“When we started, we wanted a place where writers could improve their craft, get started on getting published and learn the in’s and out’s of freelancing. The most logical way for us to do that was by organizing workshops,” said Santos, a journalist who focuses on women and gender issues.

Santos is a regular columnist in Rappler and Working Mom and as the 2014 Persephone Miel Fellow for the Pulitzer Center on Crisis Reporting, her work has been published in The Atlantic and The Washington Post.

“The ‘Jumpstart Your Freelance Writing Career’ workshop was our very first offering and it remains to be one of our most popular workshops,” said Sarthou-Lainez, a lifestyle writer.

Sarthou-Lainez was chosen as one of the five Asian representatives for Moleskine’s Modern Nomads in 2012. She is currently a Contributing Editor in Smile magazine and she also writes for various online and print publications.

The duo both left their respective careers to pursue their passion to become full-time freelance writers and put up Writer’s Block Philippines in 2010.

Santos once held the position of Assistant Vice-President of a financial institution and Sarthou-Lainez was once with a publishing firm.

“Our day jobs were actually crucial in preparing us for the world of freelancing,” said Santos.

“Exactly,” agreed Sarthou-Lainez. “Everything we learned about succeeding in freelancing was not taught in school.”

Writer’s Block Philippines will be holding another run of Jumpstart Your Freelance Writing Career on July 18, 2015, Saturday, at Fully Booked, Bonifacio Global City. The workshop will run from 1pm to 6pm and will cover practical tips on freelancing and how to write a story pitch that will get editors to notice you.

This event is made possible by Fully Booked, 2nd Avenue, BusinessWorld, and Freelancer.com. – Rappler.com 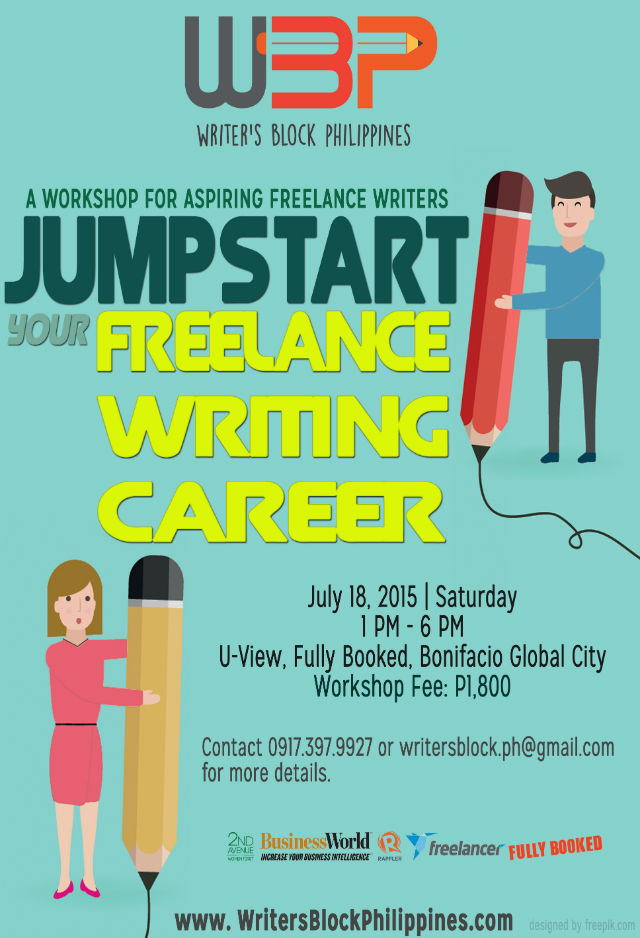