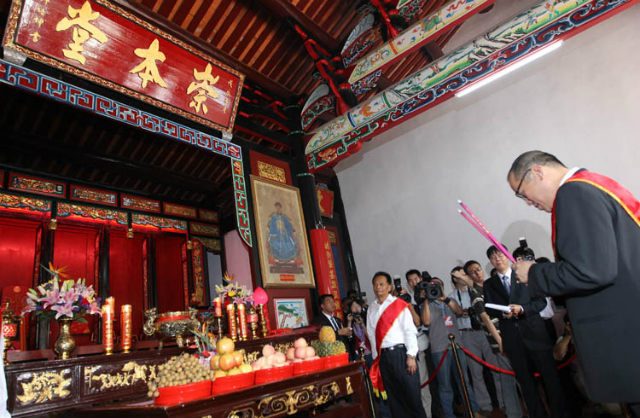 In a forum with Filipino and Thai journalists, we asked Shi Ding, deputy editor in chief of top Chinese news website Huanqiu.com, what statement from the Philippines had angered the Chinese the most in the South China Sea dispute.

Speaking through a translator, Shi cited no particular statement from the Philippine government, but singled out a person who, in a way, is one of their own: “It’s your president, President Aquino.”

Shi said on Friday, June 26: “There are many statements…and also actions of his. And the most important thing, he actually has some Chinese blood. Because of his background, most of the Chinese people are very angry about what he says and what he does.”

Aquino traces his roots to Hongjian village in China’s Fujian province, which he visited in 2011. His mother, former President Corazon Cojuangco Aquino, came from the line of Chinese immigrant Co Yu Hwan, who moved to the Philippines in 1861.

Aquino’s spokesman has cited the President’s Chinese roots in downplaying the dispute over the South China Sea, which the Philippines claims as the West Philippine Sea.

Despite this, in 2013, Aquino would become the first president to approve bringing China to court over the maritime row.

China has viewed these arbitration proceedings as “unfriendly” on the part of the Philippines. (READ: China to PH: Friends avoid lawsuits)

While Manila pursues this case, Shi said “99.5%” of his website’s users think the Philippines “uses many inflammatory words” on the maritime row.

He added that “more than 95%” of the users of Huanqiu.com, which is affiliated with China’s Global Times newspaper, think that the Philippines does these things “because of the United States’ support.”

Shi spoke on Friday before 8 journalists from Filipino and Thai news websites, including Rappler, in a forum sponsored by the Chinese foreign ministry.

His comments show rising emotions against Manila in Beijing.

After all, the South China Sea dispute is “the most popular topic now in China,” Shi said.

He said the Chinese, however, have different opinions on the issue. “The readers would have more reasonable thinking, and would not think that it’s all the responsibility of the United States,” Zhou said.

In any case, Chinese editors agreed it is the media’s role to help in resolving the maritime row.

Shi cited a visit of Huanqiu.com personnel to Vietnam “to help the Chinese people know the true Vietnam.” This, despite the two countries’ dispute also over the South China Sea.

“We think it’s the media’s responsibility to help solve the problem and build a more friendly relationship with neighboring countries,” he said. – Rappler.com